Information about whether and how well agencies are reaching their goals is essential to making the federal government more effective. This only works, however, when federal managers use that data to make decisions.

Despite various efforts aimed at increasing managers’ use of data in decision making, our work has found little change over the past 20 years. The Office of Management and Budget has begun taking steps to address this issue, and our work identified additional practices—such as data-driven reviews—that can lead to increased use of data.

We recommended that OMB do more to further improve managers' use of performance information. 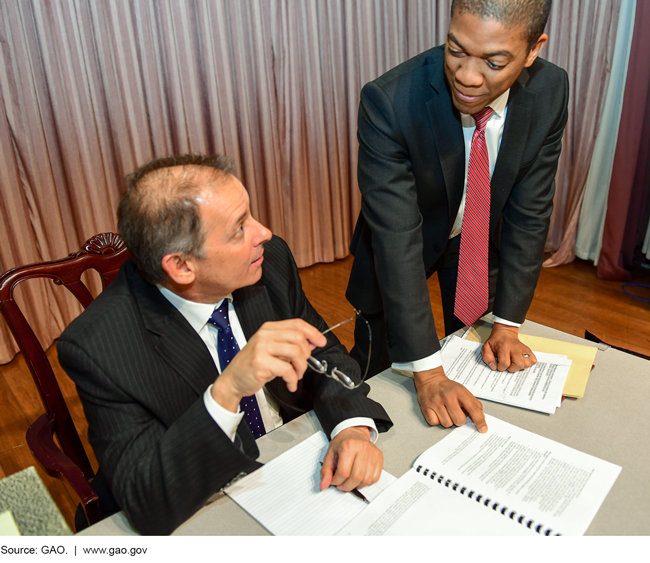 Agency Reviews Associated with Increased Use of Performance Information in 2017

The Executive Branch has begun taking steps to improve the use of performance information within agencies and across the government. For example,

In the President's Management Agenda and government-wide reform plan, released in March and June 2018 respectively, the administration acknowledged the need to do more, and announced a goal, among other actions, to improve the use of data in federal decision making. However, the Office of Management and Budget (OMB) and others responsible for this goal have yet to fully develop action plans to hold agencies accountable for achieving it.

The Performance Improvement Council (PIC), which is chaired by OMB, has undertaken efforts to improve the use of performance information by, for example, creating a working group on agency performance reviews. But it has not yet taken a systematic approach to identify and share proven practices that led to, or challenges that may be hampering, increased use of performance information by managers. GAO's survey results identified agencies that may have insights into such practices and challenges.

More fully developing action plans for the new goal, and identifying and sharing proven practices and challenges, could help ensure the Executive Branch takes further steps to improve the use of performance information by managers within agencies and across the federal government.

To reform the federal government and make it more efficient and effective, agencies need to use data about program performance. The benefit of collecting performance information is only fully realized when it is used by managers to make decisions aimed at improving results.

To address the first objective, GAO analyzed results from its 2017 survey of federal managers, and compared them to 2013 results. The survey covered a stratified random sample of 4,395 managers from the 24 Chief Financial Officers Act agencies. The survey had a 67 percent response rate and results can be generalized to the population of managers government-wide and at each agency. For the second objective, GAO reviewed agency documents and interviewed staff from OMB and the PIC.

To improve the use of performance information within agencies and across the federal government, GAO recommends that OMB work with (1) fellow goal leaders to more fully develop action plans for the new goal to improve the use of data and (2) the PIC to prioritize efforts to identify and share proven practices and challenges. OMB had no comments on this report.