Nonimmigrant visas (NIV) are issued to foreign tourists, students, and others seeking temporary admission to the United States.

In 2017, the President restricted issuance of visas for people from certain countries and called for changes to NIV screening and vetting procedures.

State Department data indicated that about 2.8 million NIV applications were refused in fiscal year 2017. We found that over 90% were because the applicant did not qualify for the visa, and 1,338 were refused due to the President's visa entry restrictions. 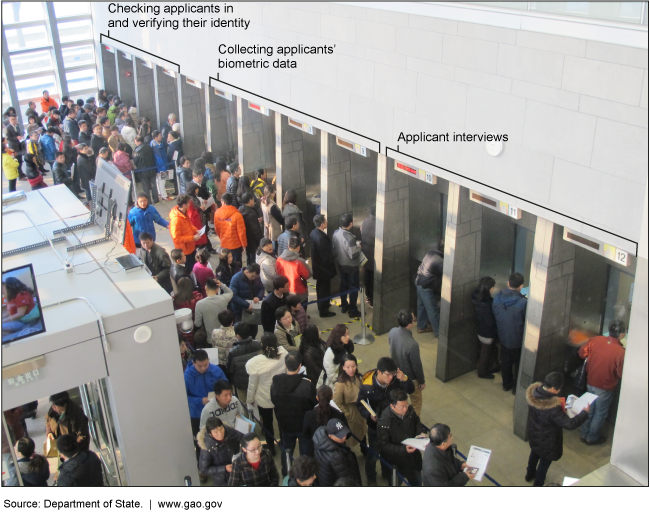 This picture shows people in line at a U.S. embassy to apply and interview for nonimmigrant visas.

In 2017, two executive orders and a proclamation issued by the President required, among other actions, visa entry restrictions for nationals of certain listed countries of concern, the development of uniform baseline screening and vetting standards, and changes to NIV screening and vetting procedures.

Previous attempted and successful terrorist attacks against the United States have raised questions about the security of the U.S. government's process for adjudicating NIVs, which are issued to foreign nationals, such as tourists, business visitors, and students, seeking temporary admission into the United States. For example, the December 2015 shootings in San Bernardino, California, led to concerns about NIV screening and vetting processes because one of the attackers was admitted into the United States under a NIV. In 2017, the President issued executive actions directing agencies to improve visa screening and vetting, and establishing nationality-based visa entry restrictions, which the Supreme Court upheld in June 2018.

GAO was asked to review NIV screening and vetting. This report examines (1) outcomes and characteristics of adjudicated NIV applications from fiscal years 2012 through 2017, and (2) key changes made to the NIV adjudication process in response to executive actions taken in 2017.

This is a public version of a sensitive report issued in June 2018. Information that DHS, State, and the Office of the Director of National Intelligence deemed sensitive has been removed.