Twenty-two agencies—several with major management challenges—combined to form the Department of Homeland Security in 2003. Since then, DHS has often struggled to build a cohesive, effective department, and its management has remained on our High Risk list.

Its Office of Strategy, Policy, and Plans helps shape DHS by, for example, developing and coordinating departmentwide strategies and policies. The office has been effective with strategies, but a lack of clearly defined roles and responsibilities in DHS has hampered its efforts to develop and align policies.

We recommended, among other things, that DHS more clearly define the office's role. 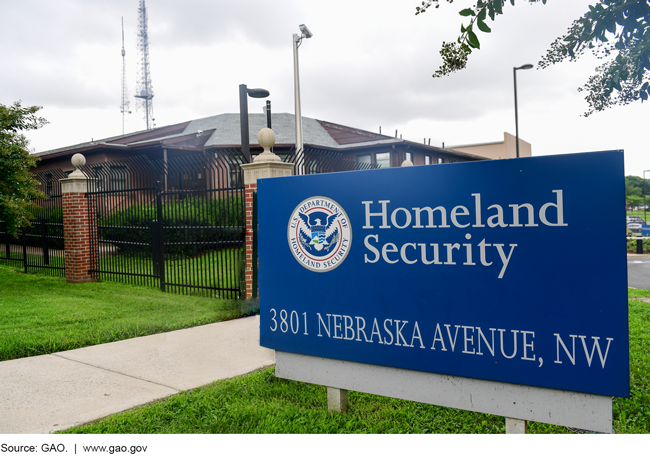 Photo of a Department of Homeland Security sign by the Nebraska Avenue complex entrance.

According to our analysis and interviews with operational components, the Department of Homeland Security's (DHS) Office of Strategy, Policy, and Plans' (PLCY) organizational structure and efforts to lead and coordinate departmentwide and crosscutting strategies—a key organizational objective–have been effective. For example, PLCY's coordination efforts for a strategy and policy executive steering committee have been successful, particularly for strategies. However, PLCY has encountered challenges leading and coordinating efforts to develop, update, or harmonize policies that affect multiple DHS components. In large part, these challenges are because DHS does not have clearly-defined roles and responsibilities with accompanying processes and procedures to help PLCY lead and coordinate policy in a predictable, repeatable, and accountable manner. Until PLCY's roles and responsibilities for policy are more clearly defined and corresponding processes and procedures are in place, situations where the lack of clarity hampers PLCY's effectiveness in driving policy are likely to continue. Development of a delegation of authority, which involves reaching agreement about PLCY's roles and responsibilities and clearly documenting them, had been underway. However, it stalled due to changes in department leadership. As of May 2018, the effort had been revived, but it is not clear whether and when DHS will finalize it.

PLCY does some workforce planning as part of its annual budgeting process, but does not systematically apply key principles of the DHS Workforce Planning Guide to help ensure that PLCY's workforce aligns with its and DHS's priorities and goals. According to PLCY officials, the nature of its mission requires a flexible staffing approach. As such, a portion of the staff functions as generalists who can be assigned to meet the needs of different situations, including unexpected changing priorities due to an emerging need. However, shifting short-term priorities requires tradeoffs, which may divert attention and resources from longer-term priorities. As of June 5, 2018, PLCY also had a number of vacancies in key leadership positions, which further limited attention to certain priorities. According to PLCY officials, PLCY recently began a review to identify the office's authorities in the National Defense Authorization Act for Fiscal Year 2017 (NDAA) and other statutes, compare these authorities to the current organization and operations, and address any workforce capacity gaps. Employing workforce planning principles—in particular, systematic identification of workforce demand, capacity gaps, and strategies to address them—consistent with the DHS Workforce Planning Guide could better position PLCY to use its workforce as effectively as possible under uncertain conditions and to communicate effectively with DHS leadership about tradeoffs.

Officials from PLCY and DHS operational components praised existing mechanisms to coordinate and communicate at the senior level, especially about strategy, but component officials identified opportunities to better connect PLCY and component staff to improve communication flow about emerging policy and strategy needs. Among the ideas offered by component officials to enhance communication and collaboration were holding routine small-group meetings, creating forums for periodic knowledge sharing, and maintaining accurate and up-to-date contact information for all staff-level stakeholders.

GAO has designated DHS management as high risk because of challenges in building a cohesive department. PLCY supports cohesiveness by, among other things, coordinating departmentwide policy and strategy. In the past, however, questions have been raised about PLCY's efficacy. In December 2016, the NDAA codified PLCY's organizational structure, roles, and responsibilities.

GAO was asked to evaluate PLCY's effectiveness. This report addresses the extent to which (1) DHS established an organizational structure and processes and procedures that position PLCY to be effective, (2) DHS and PLCY have ensured alignment of workforce with priorities, and (3) PLCY has engaged relevant component staff to help identify and respond to emerging needs. GAO analyzed the NDAA, documents describing specific responsibilities, and departmentwide policies and strategies. GAO also interviewed officials in PLCY and all eight operational components.

GAO is making four recommendations. DHS concurred with three recommendations, including that DHS finalize a delegation of authority defining PLCY's roles and responsibilities and develop corresponding processes and procedures. DHS did not concur with a recommendation to apply the DHS Workforce Planning Guide to identify and communicate workforce needs. GAO believes this recommendation is valid as discussed in the report.