The Census Bureau is required to count the population as of April 1, 2020; deliver state counts to the President by December 31, 2020; and provide redistricting data to the states by April 1, 2021. To meet these deadlines, the Bureau manages an integrated master schedule with hundreds of projects that must proceed in concert with each other.

We looked at the reliability of the Bureau's project schedules and found ongoing issues. For example, none of the schedules we reviewed contained information on resource needs and availability. We've previously recommended that the Bureau include resource estimates in the 2020 master schedule. 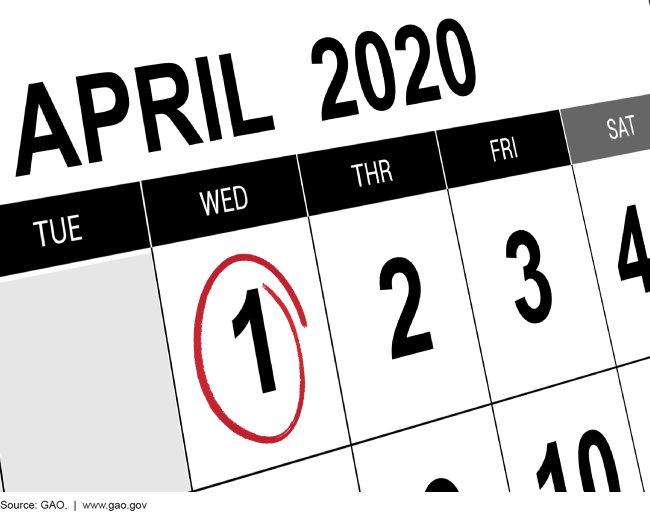 Photo of a calendar showing the date April 1 2020 circled in red.

The three census project schedules GAO reviewed better reflect characteristics of a reliable schedule compared to a GAO schedule assessment performed in 2013, but weaknesses remain. GAO reviewed three projects that contribute to two of the Census Bureau's (Bureau) largest field operations—address canvassing and nonresponse follow-up. The schedules for all three projects are better constructed and more credible than previously reviewed project schedules. For example, the Bureau has improved the logic of the relationship between activities, and better ensured that all schedules are linked together in a master schedule so that their interactions can be better managed.

However, the three selected schedules have some of the same weaknesses GAO identified in other Bureau schedules in 2009 and 2013. For example, none of the selected schedules contain information on resource needs and availability. GAO has reported that such information assists program offices in forecasting the likelihood that activities will be completed as scheduled. It can also help management compute total labor and equipment hours, calculate total project and per-period cost, resolve resource conflicts, and establish the reasonableness of the plan. If the schedule does not allow insight into current or projected allocation of resources, then the likelihood is significantly increased that the program may slip or need additional resources to complete on time.

In GAO's 2009 review of the Bureau's schedule, GAO recommended that the Bureau include in the 2020 master schedule estimates of the resources, such as labor, materials, and overhead costs for each activity as the 2020 schedule was built. The Department of Commerce did not respond to the recommendation at that time. Then, regarding GAO's 2013 assessment of the Bureau's schedule, Bureau officials stated that they hoped to begin identifying the resources needed for each activity in their schedules by early 2014. However, as of May 2018, the Bureau had not taken these steps. Senior Bureau officials have now stated that it would require additional staffing in order to plan for and implement this recommendation.

Additionally, the Bureau has not conducted risk assessments for the project schedules GAO assessed. Schedule risk analysis—the systematic analysis of “what if” scenarios—is an established leading practice. Risk assessments are needed to determine the likelihood of the project's completion date; how much schedule risk contingency is needed to provide an acceptable level of certainty for completion by a specific date; risks most likely to delay the project; how much contingency reserve each risk requires; and the paths or activities that are most likely to delay the project.

GAO believes that these prior recommendations still apply and can help the Bureau improve the reliability of its 2020 schedule.

The Bureau is required by law to count the population as of April 1, 2020; deliver state apportionment counts to the President by December 31, 2020; and provide redistricting data to the states within 1 year of Census Day, April 1, 2021. To meet these statutory deadlines, the Bureau carries out hundreds of projects, which it manages with an integrated master schedule. Because census operations need to proceed in concert with one another, significant delays could propagate to other activities resulting in increased costs, reduced operational quality, or changes to the design of the census in order to compensate for lost time.

This report determines the extent to which the Bureau is using leading practices for scheduling key projects.

GAO provided a draft of this report to the Department of Commerce, which agreed with the findings.