The federally funded District of Columbia Tuition Assistance Grant (DCTAG) program was created in 1999 to give college-bound District of Columbia (D.C.) residents greater choices among institutions of higher education. Since its creation, the DCTAG program has awarded over $440 million to more than 26,000 residents to defray costs charged to out-of-state residents at some of the nation's public colleges and universities. While the program serves students from families with a wide range of household incomes, about half the students receiving a DCTAG award in academic years 2007–2016 came from the three D.C. wards with the lowest household incomes, as the figure below illustrates. DCTAG coordinates with public and private partners in the community to help students prepare for college, complete financial aid applications, and stay on track to graduate college. 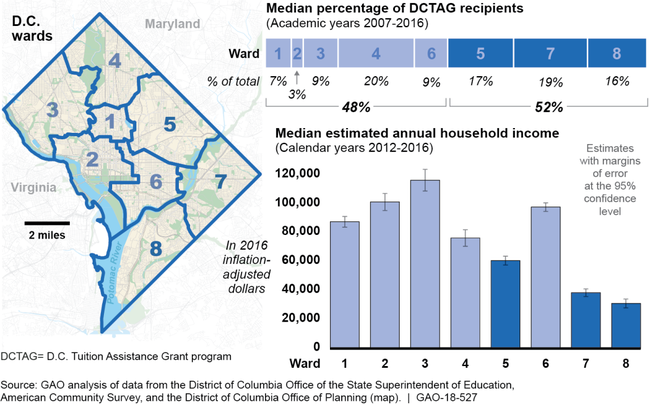 Although the Office of the State Superintendent of Education (OSSE), which manages DCTAG on behalf of the Mayor of the District of Columbia, issues various annual reports, these reports do not relate program performance to the program's four goals. One of these goals is to help D.C. students make smarter college choices. OSSE officials stated that they regularly communicate information about DCTAG data and activities internally and externally. However, these efforts do not provide the context necessary for program managers, Congress, or the public to understand the program's goals, nor determine whether DCTAG is making progress toward meeting them. Standards for internal control state that program managers should communicate information that internal and external stakeholders need to help the program achieve its objectives. Absent an annual report relating performance to goals, DCTAG's stakeholders will be limited in their ability to assess the program's performance or identify opportunities to improve it.

Congress funds DCTAG through an annual appropriation, which was $40 million in fiscal year 2018. DCTAG provides D.C. residents up to $10,000 per year to attend college.

The Consolidated Appropriations Act, 2017, included a provision for GAO to review DCTAG. This report examines, among other things, the characteristics of DCTAG recipients and steps taken by the program to support recipients, as well as the extent to which OSSE reports DCTAG's performance to internal and external stakeholders.

GAO assessed the most recent data available on DCTAG, covering academic years 2007–2016, as well as data on college graduation, tuition, and fees from the Department of Education's Integrated Postsecondary Education Data System for academic years 2007–2016, and data on enrollment in high schools and median household income in D.C. from the U.S. Census Bureau's American Community Survey for 2007–2016; interviewed representatives of DCTAG and the entities it partners with to support recipients; and reviewed relevant laws, the applicability of standards for internal control, and guidance on performance management.

GAO recommends OSSE issue annual reports relating DCTAG's performance to program goals. In response to the recommendation, the Mayor stated that OSSE will expand annual reporting to include direct linkages and combine data points to better illustrate the program's performance.