Dismantling and disposing of the ex-USS Enterprise nuclear aircraft carrier may cost the Navy more than $1 billion.

We found that typical budget and reporting on dismantlement and disposal does not give enough information to support oversight for a project of this size and cost. We recommended the Navy provide additional budget information and reporting for the project.

We also found that using commercial industry to dismantle and dispose of the aircraft carrier may offer many benefits to the Navy. At present, a regulatory disagreement between agencies hampers this possibility. We suggested that Congress consider action to resolve this. 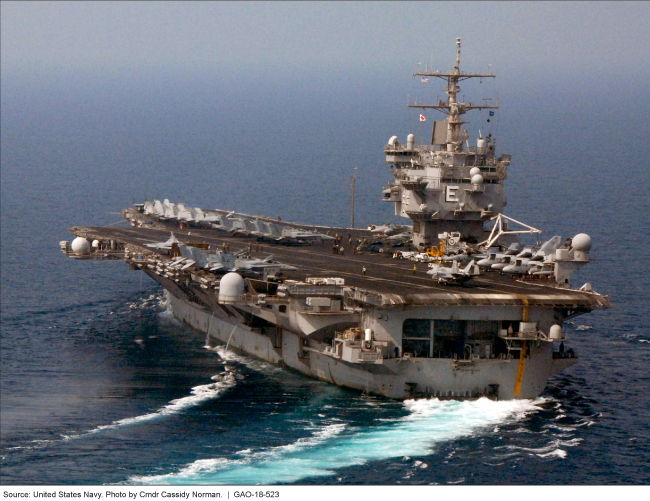 Characteristics of the Navy's Potential CVN 65 Dismantlement and Disposal Options

The Navy could rely on its extensive regulatory experience for the naval shipyard option. However, the Navy's ability to effectively evaluate the full commercial option is hampered by a disagreement with the Nuclear Regulatory Commission (NRC), which oversees the commercial nuclear industry. Naval Reactors officials assert that NRC's regulatory authority should apply to the full commercial option. NRC disagrees with this position. Coordination between the two agencies to identify the applicable regulatory authority and craft a regulatory plan would help ensure accountability, solidify cost estimates, and facilitate a CVN 65 decision.

The budget documentation and reporting that the Navy typically uses for ship dismantlement and disposal projects will not enable adequate oversight of CVN 65—a multi-year project with a cost that may exceed $1 billion. The documents that support Navy budget requests for dismantlement and disposal funding do not provide data that decision makers can readily use to track dismantlement costs against an established baseline or to evaluate funding plans for future years. Further, the Navy has no reporting requirements to support accountability for CVN 65 activities. Large defense acquisition programs generally are required to submit more detailed budget information and report on cost, schedule, and performance. These practices could be adapted for CVN 65 to provide information that will facilitate oversight commensurate with the scale of the effort.

The Navy is planning to dismantle and dispose of CVN 65 after 51 years of service. In 2013, the estimated cost to complete the CVN 65 work as originally planned increased to well over $1 billion, leading the Navy to consider different dismantlement and disposal options.

The Senate Report accompanying a bill for the National Defense Authorization Act for Fiscal Year 2018 included a provision for GAO to review the Navy's plans for CVN 65. This report addresses (1) dismantlement and disposal options under consideration; (2) nuclear regulatory authority considerations; and (3) funding and reporting practices.

GAO reviewed budget, cost, and schedule documentation, as well as applicable laws, regulations, executive orders, policies, and guidance. GAO interviewed officials from the Navy and commercial companies about the dismantlement and disposal options, and NRC and state agencies about regulatory considerations.

Congress should consider requiring Naval Reactors to coordinate with NRC to identify the applicable regulatory authority for a CVN 65 commercial dismantlement and disposal. GAO is also making four recommendations, including that the Navy take action to provide additional budget information and reporting to facilitate improved transparency and accountability for the CVN 65 cost, schedule, and risks. The Department of Defense agreed with all four recommendations.