Do women pay more than men for similar consumer products, giving rise to what some call a “Pink Tax”? After controlling for product size and other factors, prices for half of the personal care items we looked at are higher for women, including deodorants and fragrances. Some men's items cost more, such as razors.

Whether the price differences are due to gender bias is unclear. Ad costs and consumer preferences also affect pricing. No federal law prevents firms from charging different prices for men's and women's products. 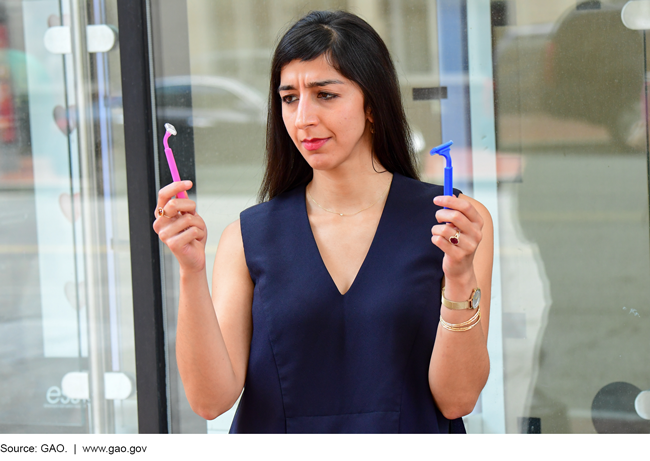 Photo of a woman holding a pink razor in one hand, and a blue one in another, and looking perplexed

Firms differentiate many consumer products to appeal separately to men and women by slightly altering product attributes like color or scent. Products differentiated by gender may sell for different prices if men and women have different demands or willingness to pay for these product attributes. Of 10 personal care product categories (e.g., deodorants and shaving products) that GAO analyzed, average retail prices paid were significantly higher for women's products than for men's in 5 categories. In 2 categories—shaving gel and nondisposable razors—men's versions sold at a significantly higher price. One category—razor blades--had mixed results based on two price measures analyzed, and two others—disposable razors and mass-market perfumes—showed no significant gender price differences. GAO found that the target gender for a product is a significant factor contributing to price differences identified, but GAO did not have sufficient information to determine the extent to which these gender-related price differences were due to gender bias as opposed to other factors, such as different advertising costs. Though the analysis controlled for several observable product attributes, such as product size and packaging type, all underlying differences in costs and demand for products targeted to different genders could not be fully observed.

Studies GAO reviewed found limited evidence of gender price differences for four products or services not differentiated by gender—mortgages, small business credit, auto purchases, and auto repairs. For example, with regard to mortgages, women as a group paid higher average mortgage rates than men, in part due to weaker credit characteristics, such as lower average income. However, after controlling for borrower credit characteristics and other factors, three studies did not find statistically significant differences in borrowing costs between men and women, while one found women paid higher rates for certain subprime loans. In addition, one study found that female borrowers defaulted less frequently than male borrowers with similar credit characteristics, and the study suggested that women may pay higher mortgage rates than men relative to their default risk. While these studies controlled for factors other than gender that could affect borrowing costs, several lacked important data on certain borrower risk characteristics, such as credit scores, which could affect analysis of gender disparities. Also, several studies analyzed small samples of subprime loans that were originated in 2005 or earlier, which limits the generalizability of the results.

Gender-related price differences occur when consumers are charged different prices for the same or similar goods and services because of factors related to gender. While variation in costs and consumer demand may give rise to such price differences, some policymakers have raised concerns that gender bias may also be a factor. While the Equal Credit Opportunity Act and Fair Housing Act prohibit discrimination based on sex in credit and housing transactions, no federal law prohibits businesses from charging consumers different prices for the same or similar goods targeted to different genders.