Every year, we identify and report on federal agencies, programs, and initiatives with fragmented, overlapping, or duplicative goals or activities; and ways to reduce costs or enhance revenue. The government saves money when it takes the actions we've proposed—an estimated $178 billion so far.

We testified on our 8th annual report, in which we identified 68 new actions that Congress and executive branch agencies could take to improve operations across government.

Fully addressing these and remaining actions from our prior reports could lead to tens of billions of dollars of additional savings. 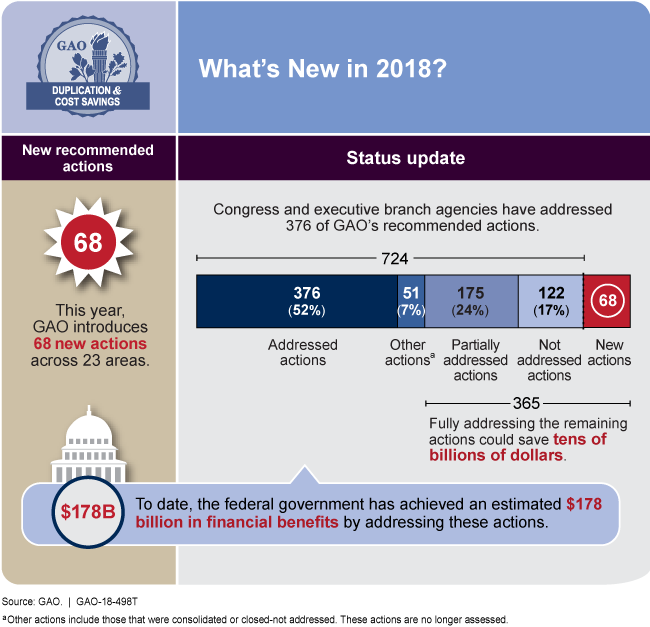 A summary figure highlighting numbers of new recommended actions and the status of prior actions.

GAO's 2018 annual report identifies 68 new actions that Congress or executive branch agencies can take to improve the efficiency and effectiveness of government in 23 new program areas. For example:

The Department of Defense (DOD) could potentially save approximately $527 million over 5 years by minimizing unnecessary overlap and duplication in its U.S. distribution centers for troop support goods.

The Department of Energy may be able to reduce certain risks and save tens of billions of dollars by adopting alternative approaches to treat a portion of its low-activity radioactive waste at its Hanford Site.

The Department of Veterans Affairs could potentially save tens of millions of dollars when acquiring medical and surgical supplies by better adhering to supply chain practices of leading hospitals.

The Coast Guard should close its boat stations that provide unnecessarily duplicative search and rescue coverage to improve operations and potentially save millions of dollars .

Significant progress has been made in addressing many of the 724 actions that GAO identified from 2011 to 2017. As of March 2018, Congress and executive branch agencies have fully or partially addressed 551 (76 percent) of these actions. This has resulted in about $178 billion in financial benefits, of which $125 billion has been realized and at least an additional $53 billion is estimated to accrue. These estimates are based on a variety of sources that considered different time periods, assumptions, and methodologies. GAO estimates that tens of billions of additional dollars could be saved should Congress and executive branch agencies fully address the remaining 365 open actions, including the 68 new ones identified in 2018.

Further steps are needed to fully address these remaining actions. For example:

Congress and the Internal Revenue Service could realize hundreds of millions of dollars in savings and increased revenues by enhancing online services and improving efforts to prevent identity theft refund fraud.

Medicare could save $1 to 2 billion annually if Congress equalized the rates paid for certain health care services, which often vary depending on where the service is performed.

DOD could achieve billions of dollars in savings over the next several years by continuing to employ best management practices on its weapon systems acquisition programs.

The Social Security Administration could help prevent the loss of billions of dollars by preventing overpayments to beneficiaries of the Disability Insurance program and improper waivers of beneficiaries' overpayment debt.

The federal government faces a long-term, unsustainable fiscal path based on an imbalance between federal revenues and spending. While addressing this imbalance will require fiscal policy changes, in the near term opportunities exist in a number of areas to improve this situation, including where federal programs or activities are fragmented, overlapping, or duplicative.

To call attention to these opportunities, Congress included a provision in statute for GAO to identify and report on federal programs, agencies, offices, and initiatives—either within departments or government-wide—that have duplicative goals or activities. GAO also identifies areas that are fragmented or overlapping and additional opportunities to achieve cost savings or enhance revenue collection. GAO's 2018 annual report is its eighth in this series (GAO-18-371SP).

the progress made in addressing actions GAO identified in its 2011 to 2017 reports; and

To identify what actions exist to address these issues, GAO reviewed and updated prior work, including recommendations for executive action and matters for congressional consideration.