The Department of Defense spends billions of dollars a year on satellites that provide critical communications, reconnaissance, and other capabilities.

We found that DOD may be able to save money and add capabilities faster by paying private companies to host government sensors or other equipment on their satellites. DOD estimates it has already saved hundreds of millions of dollars from this cost-sharing approach.

We recommended that DOD gather data in a central location from its programs that use these commercially hosted payloads. Assessing this data could help DOD make reasoned, evidence-based decisions on future host satellite use.

Illustration of Satellites Owned by DOD, Other Agencies, Foreign Countries, and Private Companies 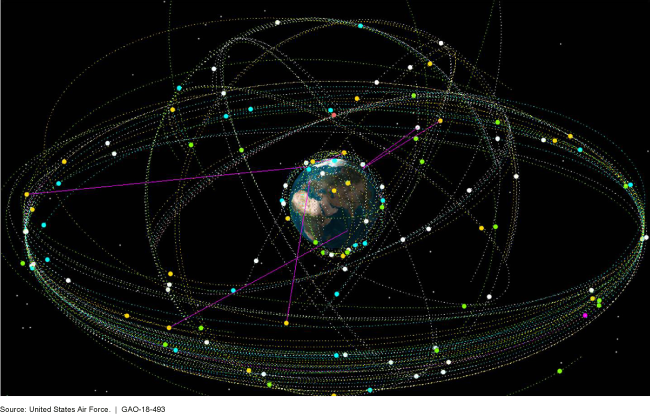 Graphic representing the man-made satellites that orbit the Earth.

GAO and others have found that using commercial satellites to host government sensors or communications packages—called payloads—may be one way DOD can achieve on-orbit capability faster and more affordably. Using hosted payloads may also help facilitate a proliferation of payloads on orbit, making it more difficult for an adversary to defeat a capability. Since 2009, DOD has used three commercially hosted payloads, with three more missions planned or underway through 2022 (see figure below).

DOD estimates that it has achieved cost savings of several hundred million dollars from using commercially hosted payloads to date, and expects to realize additional savings and deliver faster capabilities on orbit from planned missions. Cost savings can result from sharing development, launch, and ground system costs with the commercial host company.

Among the factors that affect DOD's use of hosted payloads are

a perception among some DOD officials that matching government payloads to commercial satellites is too difficult; and

limited, fragmented knowledge on how to mitigate various challenges

GAO found that further opportunities to use hosted payloads may emerge as DOD plans new and follow-on space systems in the coming years. However, DOD's knowledge on using hosted payloads is fragmented, in part because programs are not required to share information. In 2011, the Air Force created a Hosted Payload Office to provide expertise and other tools to facilitate matching government payloads with commercial hosts. However, GAO found that DOD programs using hosted payloads are not required and generally do not provide cost and technical data, or lessons learned, to the Hosted Payload Office, or another central office for analysis. Requiring programs that use hosted payloads agency-wide to provide this information to a central location would better position DOD to make informed decisions when considering acquisition approaches for upcoming space system designs.

Each year, DOD spends billions of dollars to develop, produce, and field large, complex satellites. For such satellite systems, a single adversary attack or on-orbit failure can result in the loss of billions of dollars of investment and significant loss of vital capabilities. As DOD plans new space systems and addresses an increasingly contested space environment, it has the opportunity to consider different acquisition approaches. One such approach is to integrate a government sensor or payload onto a commercial host satellite.

GAO recommends that DOD require programs using commercially hosted payloads to contribute resulting data to a central location. In implementing this recommendation, DOD should assess whether the Air Force's Hosted Payload Office is the appropriate location to collect and analyze the data. DOD concurred with the recommendation.

Love is in the Air: A GAO Mixtape, Part 2