NASA contracted with two companies, Boeing and SpaceX, to develop vehicles to transport astronauts to the International Space Station. Neither is expected to be ready until 2019.

Before any missions happen, NASA will have to certify that both contractors' vehicles are safe for human spaceflight. One way that NASA will assess safety is the loss of crew metric, which captures the probability of a crew member's death or disability. However, NASA doesn't have a consistent approach for calculating this metric, so results can vary based on who within NASA is conducting the analysis.

We recommended that NASA clarify how it will assess loss of crew. 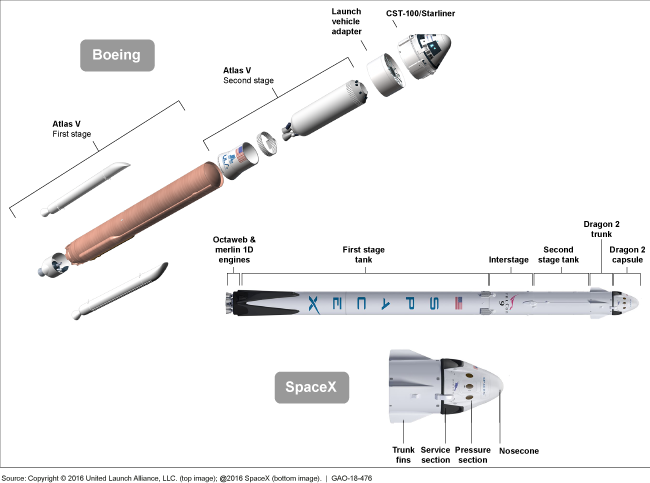 Both of the Commercial Crew Program's contractors, Boeing and Space Exploration Technologies Corporation (SpaceX), are making progress finalizing designs and building hardware for their crew transportation systems, but both contractors continue to delay their certification milestone (see figure). Certification is the process that the National Aeronautics and Space Administration (NASA) will use to ensure that each contractor's system meets its requirements for human spaceflight for the Commercial Crew Program.

Further delays are likely as the Commercial Crew Program's schedule risk analysis shows that the certification milestone is likely to slip. The analysis identifies a range for each contractor, with an earliest and latest possible completion date, as well as an average. The average certification date was December 2019 for Boeing and January 2020 for SpaceX, according to the program's April 2018 analysis. Since the Space Shuttle was retired in 2011, the United States has been relying on Russia to carry astronauts to and from the International Space Station (ISS). Additional delays could result in a gap in U.S. access to the space station as NASA has contracted for seats on the Russian Soyuz spacecraft only through November 2019. NASA is considering potential options, but it does not have a contingency plan for ensuring uninterrupted U.S. access.

NASA's certification process addresses the safety of the contractors' crew transportation systems through several mechanisms, but there are factors that complicate the process. One of these factors is the loss of crew metric that was put in place to capture the probability of death or permanent disability to an astronaut. NASA has not identified a consistent approach for how to assess loss of crew. As a result, officials across NASA have multiple ways of assessing the metric that may yield different results. Consequently, the risk tolerance level that NASA is accepting with loss of crew varies based upon which entity is presenting the results of its assessment. Federal internal controls state that management should define risk tolerances so they are clear and measurable. Without a consistent approach for assessing the metric, the agency as a whole may not clearly capture or document its risk tolerance with respect to loss of crew.

In 2014, NASA awarded two firm-fixed-price contracts to Boeing and SpaceX, worth a combined total of up to $6.8 billion, to develop crew transportation systems and conduct initial missions to the ISS. In February 2017, GAO found that both contractors had made progress, but their schedules were under mounting pressure. The contractors were originally required to provide NASA all the evidence it needed to certify that their systems met its requirements by 2017.

A House report accompanying H.R. 5393 included a provision for GAO to review the progress of NASA's human exploration programs. This report examines the Commercial Crew Program, including (1) the extent to which the contractors have made progress towards certification and (2) how NASA's certification process addresses safety of the contractors' crew transportation systems. GAO analyzed contracts, schedules, and other documentation and spoke with officials from NASA, the Commercial Crew Program, Boeing, SpaceX, and two of NASA's independent review bodies that provide oversight.