Military pilots perform an array of national security operations, such as combat missions and reconnaissance. Consequently, retaining qualified pilots is important—both to fulfill missions and to recoup the substantial investments of time and money needed to train military pilots.

We found that the Air Force, the Navy, and the Marine Corps all had staffing gaps for certain types of pilots during FYs 2013-2017. And these services also lacked information about post-service employment for pilots, such as the number that left the military for commercial airlines. We recommended collecting this data to improve efforts to retain military pilots.

Pilot Loss Rates for Reasons Such as Retirement and Separation, FYs 2013-2017 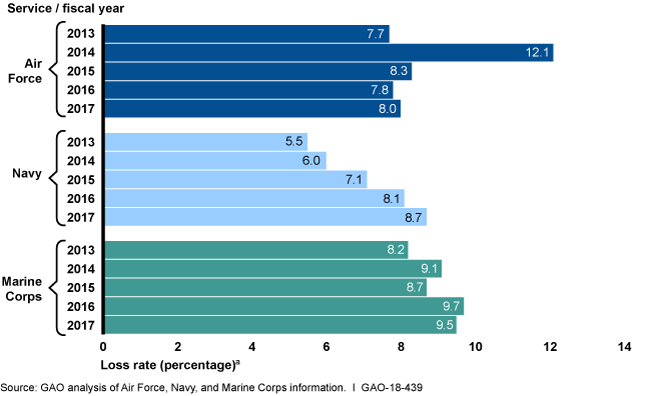 The Air Force, the Navy, and the Marine Corps had staffing gaps in some, but not all, fixed-wing pilot communities (or types of pilots) for operational positions from fiscal years 2013 through 2017. Gaps exist when actual staffing levels do not meet service-authorized staffing levels. GAO found that operational position staffing gaps decreased or generally remained the same over this time period, except for in the fighter pilot community. For fighter pilots, the gap increased across all three services over the past 2 to 5 fiscal years (see figure). In April 2018, GAO recommended that all three services reevaluate fighter pilot squadron requirements. The services agreed with these recommendations.

The three services monitor pilot retention through loss rates, but insufficient data limit a full understanding of the extent to which airline market conditions have influenced military pilot retention. The Department of Defense (DOD) has noted projected increases in airline hiring when justifying increases to aviation retention bonuses. However, DOD does not have data on the number of pilots leaving the military to accept jobs as airline pilots because, according to service officials, the services do not have mechanisms to capture these data. While studies have identified a correlation between airline hiring and military pilot retention, a study conducted on the Air Force’s behalf identified the absence of these data as a limitation. Without developing and implementing mechanisms to capture data about pilots’ post-service employment, including at commercial airlines, DOD lacks key information to support decisions regarding retention incentives.

All three services have developed retention incentives, but the Air Force’s annual business case for aviation retention bonuses—prepared in accordance with a statutory requirement—does not differentiate staffing gaps by officer grade to ensure bonuses are appropriately targeted. To help determine bonus amounts, the Air Force uses a model to weigh various factors, including staffing levels for each pilot community. However, according to an Air Force official, the model only considers overall staffing levels and does not differentiate between senior officer staffing gaps—indicating retention challenges—and junior officer gaps, indicating other challenges. Without analyzing staffing levels by officer grade as part of its annual business case, the Air Force may not know whether it is targeting its bonuses—in the right amounts—to the appropriate pilot communities.

Military pilots perform an array of operations, from combat to reconnaissance, that are critical to DOD successfully executing its national security mission. Retaining qualified pilots is important to ensure that requirements can be met, and to recoup the substantial investments—of both time and money—that the services make in training their pilots.

GAO recommends that the Air Force, the Navy, and the Marine Corps develop and implement mechanisms to capture information about pilots’ post-service employment; and that the Air Force analyze staffing levels by officer grade as part of its annual business case for aviation retention bonuses. DOD concurred with the recommendations, but noted concerns, which GAO addressed in the report.