The success of the census depends in large part on the Census Bureau's ability to record every location where a person resides. An ever-changing housing inventory and "hidden" housing—such as a converted attic or shed that may not show up in records—make this huge task even more difficult.

As part of a test run, census workers went door-to-door to try to record each housing unit in selected areas in 3 states. We reviewed this effort and found the workers generally followed procedures but software problems sometimes kept them from transmitting data they collected.

We made 7 recommendations for the 2020 Census.

Does someone live here? A converted shed or attic can complicate the Census Bureau’s efforts to record every residence. 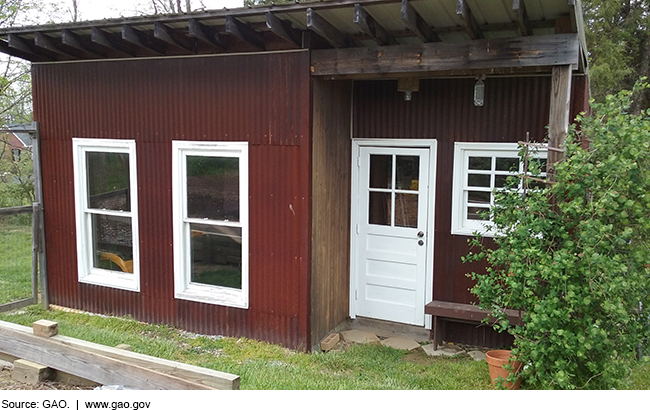 Photo of a large wooden shed with windows and doors.

The Census Bureau (Bureau) recently completed in-field address canvassing for the 2018 End-to-End Test. GAO found that field staff known as listers generally followed procedures when identifying and updating the address file; however, some address blocks were worked twice by different listers because the Bureau did not have procedures for reassigning work from one lister to another while listers work offline. Bureau officials told GAO that they plan to develop procedures to avoid duplication but these procedures have not been finalized. Duplicating work decreases efficiency and increases costs.

At all three test sites listers were significantly more productive than expected possibly because a design change provided better quality address and map data in the field, according to the Bureau.

Hiring, however, lagged behind Bureau goals. For example, at the West Virginia site hiring was only at 60 percent of its goal. Bureau officials attributed the shortfall to a late start and low unemployment rates.

Workload and productivity affect the cost of address canvassing. The Bureau has taken some steps to evaluate factors affecting its estimates, but continuing to so would help the Bureau refine its assumptions to better manage the operation's cost and hiring.

Listers used laptops to connect to the Internet and download assignments. They worked offline and went door-to-door to update the address file, then reconnected to the Internet to transmit their completed assignments. Bureau officials told GAO that during the test 11 out of 330 laptops did not properly transmit address and map data collected for 25 blocks. Data were deleted on 7 laptops. Because the Bureau had known there was a problem with software used to transmit address data, it created an alert report to notify the Bureau staff if data were not properly transmitted. However, Bureau officials said that either responsible staff did not follow procedures to look at the alert reports or the reports were not triggered. The Bureau is working to fix the software problem and develop new alert reports, but has not yet determined and addressed why these procedures were not followed.

The Bureau's data management reporting system did not always provide accurate information because of a software issue. The system was supposed to pull data from several systems to create a set of real-time cost and progress reports for managers to use. Because the data were not accurate, Bureau staff had to rely on multiple systems to manage address canvassing. The Bureau agreed that not only is inaccurate data problematic, but that creating workarounds is inefficient. The Bureau is developing new requirements to ensure data are accurate but these requirements have not been finalized.

The success of the decennial census depends in large part on the Bureau's ability to locate every household in the United States. To accomplish this monumental task, the Bureau must maintain accurate address and map information for every location where a person could reside. For the 2018 End-to-End Test, census workers known as listers went door-to-door to verify and update address lists and associated maps in selected areas of three test sites—Bluefield-Beckley-Oak Hill, West Virginia; Pierce County, Washington; and Providence County, Rhode Island.

GAO was asked to review in-field address canvassing during the End-to-End Test. This report determines whether key address listing activities functioned as planned during the End-to-End Test and identifies any lessons learned that could inform pending decisions for the 2020 Census. To address these objectives, GAO reviewed key documents including test plans and training manuals, as well as workload, productivity and hiring data. At the three test sites, GAO observed listers conducting address canvassing.

GAO is making seven recommendations to the Department of Commerce and Bureau including to: (1) finalize procedures for reassigning work, (2) continue to evaluate workload and productivity data, (3) fix software problem, or determine and address why procedures were not followed, and (4) finalize report requirements to ensure data are accurate. The Department of Commerce agreed with GAO's recommendations, and the Bureau provided technical comments that were incorporated, as appropriate.