The amount of money people spend on prescription drugs has nearly doubled since the 1990s. Much of this increase is due to expensive brand-name drugs, but the prices of some generics have also gone up.

We looked into changes in the drug industry and found that pharmaceutical and biotechnology sales revenue increased from $534 billion to $775 billion between 2006 and 2015. Additionally, 67% of drug companies increased their annual profit margins during the same period—with margins up to 20 percent for some companies in certain years. Drug industry spending for research and development increased from $82 billion in 2008 to $89 billion in 2014. 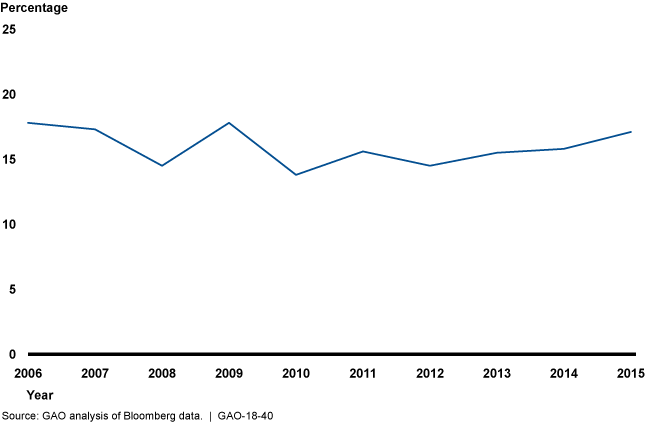 GAO's analysis of revenue, profit margin, and merger and acquisition deals within the worldwide drug industry from 2006 through 2015 identified key trends:

Estimated pharmaceutical and biotechnology sales revenue increased from $534 billion to $775 billion in 2015 dollars.

The number of reported mergers and acquisitions generally held steady during this period, but the median disclosed deal value increased.

The largest 10 companies had about 38 percent of the drug industry's sales revenue in 2014. However, concentration was higher for narrower markets, such as for certain drugs in the same therapeutic class. In addition, experts noted that market pressures such as rising research and development (R&D) costs, fewer drugs in development, and competition from generic drugs, have driven structural changes in the industry such as increased use of acquisition by large drug companies to obtain access to new research.

From 2008 through 2014, worldwide company-reported R&D spending, most of which went to drug development (rather than research), increased slightly from $82 billion to $89 billion in 2015 dollars. During the same period, federal spending, which funded a greater amount of basic research relative to industry, remained stable at around $28 billion. In addition to grants, several federal tax provisions provided incentives for industry R&D spending, including the orphan drug credit, available for companies developing drugs intended to treat rare diseases, which increased more than five-fold from 2005 through 2014. Pertaining to drug approvals, the total number of new drugs approved for marketing in the United States fluctuated between 2005 and 2016, ranging from 179 to 263 drug approvals annually. Novel drugs—innovative products that serve previously unmet medical need or help advance patient care—accounted for about 13 percent of all approvals each year. Biologics—drugs derived from living rather than chemical sources—and orphan drugs accounted for growing shares of drug approvals, reflecting market and policy incentives to invest in these areas, according to experts GAO interviewed.

The Department of Health and Human Services, Federal Trade Commission, Internal Revenue Service, and National Science Foundation provided technical comments on a draft of this report, which we incorporated as appropriate.

Retail prescription drug expenditures were estimated to account for about 12 percent of total personal health care service spending in the United States in 2015, up from about 7 percent through the 1990s. Much of this growth was driven by use of expensive brand-name drugs, but price increases have been reported for some generic drugs as well. Prior GAO reports have identified multiple reasons for drug price increases, including limited competition. Experts have questioned whether consolidation among drug companies could reduce competition and R&D investment in new drugs.

GAO was asked to examine changes in the drug industry. This report describes: (1) how the financial performance and structure of the industry have changed over time, (2) how reported R&D spending and new drug approvals have changed, and (3) what is known about the potential effects of consolidation on drug prices and new drug development. GAO analyzed Bloomberg drug industry financial data for 2006 through 2015, and examined select publicly available estimates of company market shares for 2014 and market shares for certain therapeutic classes for 2016. GAO also analyzed estimates of company self-reported R&D spending and federal funding for biomedical R&D data, aggregate tax credit claims data, and drug approval data for the same approximate time period. All data were the most current available. In addition, GAO also reviewed published research and interviewed federal agency officials, economists, and representatives from industry and advocacy groups.