Puerto Rico has roughly $70 billion in outstanding debt, and since August 2015 has defaulted on over $1.5 billion in debt.

One factor contributing to Puerto Rico’s debt levels is the Puerto Rico government's persistent annual deficits, where expenses exceeded revenues. Puerto Rico’s government has borrowed money to finance its operations, rather than cutting spending, raising taxes, or both.

We identified various potential federal actions that could help address factors contributing to the debt crisis. These include altering the tax-exempt status of Puerto Rico municipal debt, and applying federal investor protection laws to Puerto Rico. 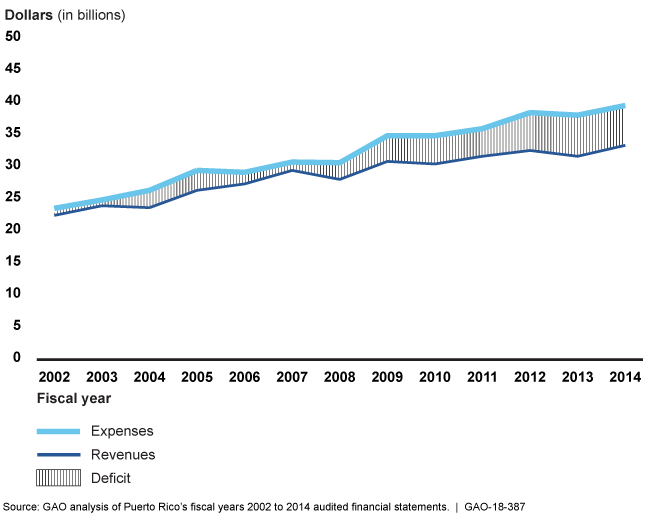 This graphic shows consistent deficits--that expenses have not met revenues--from 2002 through 2014.

The factors that contributed to Puerto Rico's financial condition and levels of debt relate to (1) the Puerto Rico government running persistent annual deficits—where expenses exceed revenues—and (2) its use of debt to cope with deficits. Based on a literature review and interviews with current and former Puerto Rico officials, federal officials, and other relevant experts, GAO identified factors that contributed to Puerto Rico's persistent deficits:

Additional factors enabled Puerto Rico to use debt to finance its deficits, such as high demand for Puerto Rico debt. One cause of high demand was that under federal law, income from Puerto Rico bonds generally receives more favorable tax treatment than income from bonds issued by states and their localities.

Based on an assessment of relevant literature and input from current and former Puerto Rico officials, federal officials, and other relevant experts, GAO identified three potential federal actions that may help address some of these factors. GAO also identified considerations for policymakers related to these actions.

Puerto Rico has roughly $70 billion in outstanding debt and $50 billion in unfunded pension liabilities and since August 2015 has defaulted on over $1.5 billion in debt. The effects of Hurricanes Irma and Maria will further affect Puerto Rico's ability to repay its debt, as well as its economic condition. In response to Puerto Rico's fiscal crisis, Congress passed the Puerto Rico Oversight, Management, and Economic Security Act (PROMESA) in 2016, which included a provision for GAO to review Puerto Rico's debt.

This report describes the factors that contributed to Puerto Rico's financial condition and levels of debt and federal actions that could address these factors. Consistent with PROMESA, GAO focused on actions that would not increase the federal deficit.

GAO is not making recommendations based on the federal actions identified because policymakers would need to consider challenges and tradeoffs related to implementation.

The Puerto Rico government generally agreed with the factors we identified and provided additional information. GAO incorporated technical comments from SEC as appropriate.