During emergencies, first responders need to be able to communicate with each other—even across jurisdictions. After Hurricane Katrina, Congress passed a law to help first responders do just that. The law created working groups to improve regional collaboration. Each group has members from different levels of government, as well as from the private sector.

We found that these groups have generally worked well at the regional level—members shared information and assisted each other during emergencies. However, we recommended that FEMA encourage nationwide collaboration among the groups. 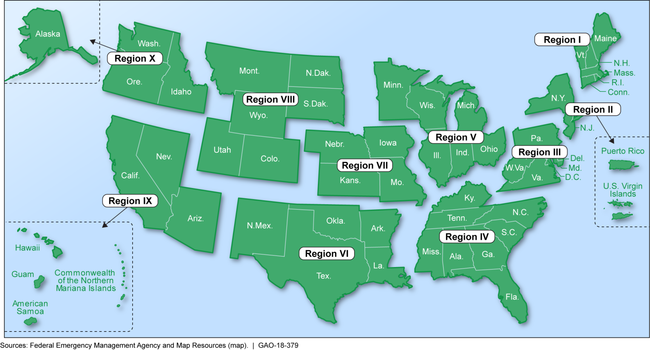 The states and territories that make up each of the 10 regional working groups.

To help address these challenges and as required by the Post-Katrina Emergency Management Reform Act of 2006 (Post-Katrina Act), the Department of Homeland Security (DHS) has provided technical assistance, such as training, and Federal Emergency Management Agency (FEMA) grants. It has also established regional emergency communications coordination working groups, which bring together stakeholders from different levels of government and the private sector within FEMA's 10 regions.

GAO found that the regional working groups have enhanced emergency communications capabilities through building relationships and sharing information. Within the respective regions, group members have:

assisted each other during disasters and emergencies,

addressed policy concerns, such as the use of interoperable radio channels during emergencies.

However, most regional group leaders told GAO that more collaboration across the groups was needed. GAO's prior work has also found that including all relevant participants can enhance collaborative efforts. Further, DHS's strategic plan for emergency communications established a vision of collaboration among stakeholders across the nation. While FEMA has encouraged collaboration among regional working-group leaders, cross-regional efforts have been limited and do not involve all group members. Developing and implementing an appropriate ongoing mechanism for collaboration could enhance emergency communications capabilities, such as by helping group members address common challenges. Without ways for all members of these groups to collaborate across regions, members may be missing opportunities to share information and leverage the knowledge and experiences of their counterparts throughout the nation.

During emergencies, reliable communications are critical. Disasters, such as 2017's hurricanes, continue to test the nation's emergency communications capabilities. As disasters can cross jurisdictional boundaries, collaboration within and across regions is very important.

GAO was asked to review implementation of the Post-Katrina Act's provisions related to disaster preparedness, response, and recovery. This report examines: (1) challenges related to emergency communications that selected stakeholders have experienced; (2) their views on DHS's emergency communications assistance; and (3) the regional working groups established by the Post-Katrina Act and their effect on emergency communications capabilities. GAO reviewed DHS's reports and grant data for fiscal years 2011–2016 and conducted case studies of three cities—Houston, Los Angeles, and Boston—selected based on the number of declared disasters, DHS grant funding, and geographic diversity. GAO interviewed DHS officials; leaders of all 10 regional working groups and other stakeholders, including public safety officials in the case study cities; and others chosen for their expertise.

FEMA should work with regional working-group members to reach consensus and implement an ongoing mechanism, such as a national-level working group, to encourage nationwide collaboration across regions. DHS concurred with this recommendation.