In all but 4 of the last 40 years, Congress has passed continuing resolutions (CR) to keep agencies running between budgets. Without appropriations or a CR, the government may partially shut down.

We testified that CRs, possible shutdowns, or both create uncertainty and inefficiency for agencies. For example, our past work found that agencies have reported delays and rework in contracts, grants, and hiring.

We also testified on ways that Congress and agencies can make things easier in this type of budget environment. For example, agencies may be able to shift contract and grant cycles to later in the fiscal year, when a CR is less likely.

(This figure was updated to include its notes.)

Duration and number of continuing resolutions. 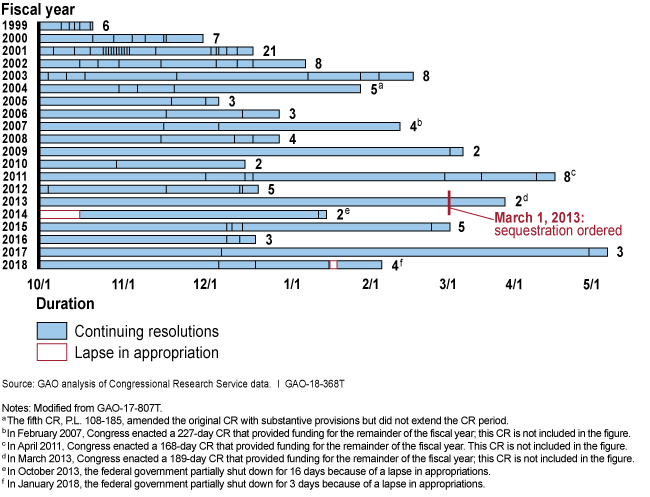 Graphic showing that every fiscal year since 1999 has had continuing resolutions. They range in number from 2 to 21.

Continuing resolutions (CR) and lapses in appropriations leading to government shutdowns create inefficiencies and other management challenges for agencies. In 2009 and 2014, GAO identified instances of reduced government services and productivity and increased costs resulting from CRs and shutdowns, including:

Delayed contracts and grants: Some agency officials reported delaying contracts and application times for grants while under a CR, which could reduce the level of services agencies provide, increase costs, and adversely affect the quality of grant submissions. For example, in 2009, officials at the Bureau of Prisons estimated that delaying a contract for a prison facility had prevented them from locking in lower prices and resulted in about $5.4 million in additional costs. The 2013 shutdown, which lasted 16 calendar days, also disrupted some activities, including clinical trials, at the agencies GAO examined due such things as furloughed staff.

Delayed hiring: Officials at the agencies GAO examined reported delaying hiring due to CRs. For example, in 2009, a Food and Drug Administration official reported that deferring hiring and training of staff during a CR had affected the agency's ability to carry out certain inspections. Agency officials also noted that because the agency may not have enough time to spend its funding on high-priority needs such as hiring new staff, it may spend funds on lower-priority items that can be procured quickly.

Additional work: Agency officials reported that managing within the constraints of a CR had created additional work, which potentially reduced productivity. In particular, shorter and more numerous CRs can lead to more repetitive work, including entering into shorter- term contracts or grants multiple times to reflect the duration of the CR.

GAO also reported that the Bureau of Economic Analysis estimated that the 2013 shutdown reduced real gross domestic product growth by 0.3 percentage points in the fourth quarter of 2013 due to lost productivity of furloughed workers. Economic forecasters GAO interviewed estimated minimal economic effects at the economy-wide level over the long term.

Legislative authorities and agency actions may mitigate challenges associated with managing during CRs and shutdowns. These include:

Legislative authorities: Congress may include in CRs specific provisions called legislative anomalies that provide some agencies or programs funding or direction different than those specified in the standard provisions that require agencies to spend more conservatively, among other things. In addition, multiyear budget authority may be helpful for managing through both CRs and shutdowns because there is less pressure to obligate the funds by the end of the year and it may allow agencies to continue some activities during a shutdown.

Agency actions: Agencies can also take actions to mitigate budget challenges. For example, agencies may have the ability to shift contract and grant cycles to later in the fiscal year when they are less likely to be under a CR. Shifting these cycles can help minimize disruption of services.

Congress annually faces difficult decisions on what to fund among competing priorities and interests, and often postpones final funding decisions to allow additional time for deliberations. In all but four of the last 40 years, Congress has passed CRs to keep government services in operation until agreement is reached on final appropriations. In some years, including the current fiscal year, when new appropriations or a CR have not been enacted on time, this lapse in appropriations—or funding gap—caused the government to partially shut down, which halted some activities at federal agencies until appropriations were passed. Operating under a CR or the possibility of a shutdown, or both, creates uncertainty, complicates agency operations, and leads to inefficiencies.

This statement is based primarily on GAO's prior reports examining the effects of CRs and the 2013 shutdown, including their effects on selected agency operations. It addresses (1) the effects of CRs and shutdowns; and (2) legislative authorities and agency actions that assist in managing such budget uncertainty and disruptions.