The U.S. President relies on a fleet of helicopters for transportation—a fleet that has been in service for decades. The Navy plans to replace the fleet by acquiring 23 helicopters, VH-92As, that are based on a current commercial model.

We found that the VH-92A helicopter program's development schedule is stable. The Navy plans to begin production in March 2019. The expected cost has decreased 2.6 percent since an initial 2014 estimate. Still, development challenges may affect the program's ability to deliver fully capable aircraft on time.

Conversion of a Sikorsky Commercial Helicopter to the VH-92 Helicopter 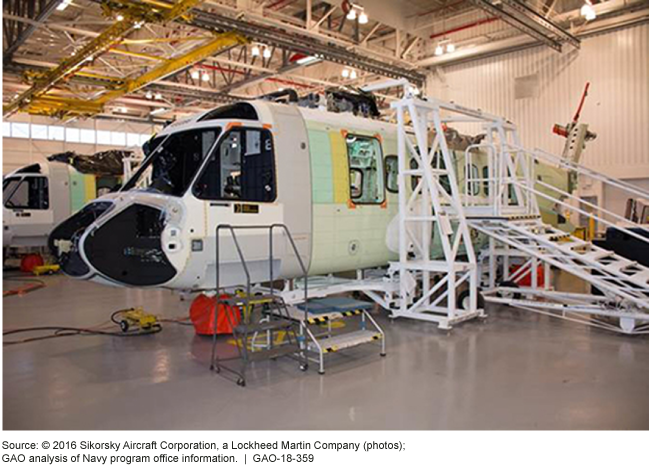 This is a photo of a commercial helicopter that is in the process of being converted to a VH-92.

Reissued with Revisions May 09, 2018
Revised May 9, 2018 to correct table 1 on page 4 and on the Highlights page. The heading of the first column should read: “then-year dollars in millions” rather than “billions.”
Skip to Highlights

The program's stability is also attributable to the Navy's acquisition strategy. The contractor, Sikorsky Aircraft Corporation is converting its existing commercial S-92A helicopter to VH-92A helicopters, as depicted below.

Conversion of Sikorsky's Commercial Helicopter to the VH-92 Helicopter

While the program has made progress, it continues to face development challenges that may adversely affect its ability to deliver fully capable VH-92A aircraft on time. Recently, the Navy and contractors have

Final resolution of these issues may not occur until after production start, currently scheduled for March 2019.

The Navy's VH-92A program—also known as the Presidential Helicopter— provides new helicopters for safe, reliable, and timely transportation for the President of the United States. The Navy plans to acquire a fleet of 23 VH-92A helicopters to replace the Marine Corps' existing fleet of VH-3D and VH-60N aircraft. Initial delivery of VH-92A helicopters is scheduled to begin in fiscal year 2020 with production ending in fiscal year 2023.

The National Defense Authorization Act of 2014 included a provision for GAO to report on the VH-92A program annually, which GAO has been doing since 2011. This report discusses (1) the cost and schedule status of the program and (2) challenges facing the program in system development.

To determine how the program is progressing, GAO analyzed program documents; and spoke with officials from the program, the Defense Contract Management Agency, contractors, and testing offices.

Revised May 9, 2018 to correct table 1 on page 4 and on the Highlights page. The heading of the first column should read: “then-year dollars in millions” rather than “billions.”
Skip to Recommendations

GAO is not making any recommendations in this report, but will continue to monitor the potential for cost growth and schedule delays as the program responds to design changes and challenges meeting capability requirements.