The Veterans Health Administration has designated patient advocates at each VA medical center to receive and document feedback from veterans.

Amid concerns about veterans’ ability to receive timely and quality care, we reviewed the VHA patient advocacy program.

We found that VHA is beginning to address governance, staffing, training, and other issues, including directing a workgroup to provide recommendations by spring of 2018. However, the recommendations are only for consideration and deadlines have slipped in the past.

We recommended 6 actions to improve guidance for and oversight of the program. 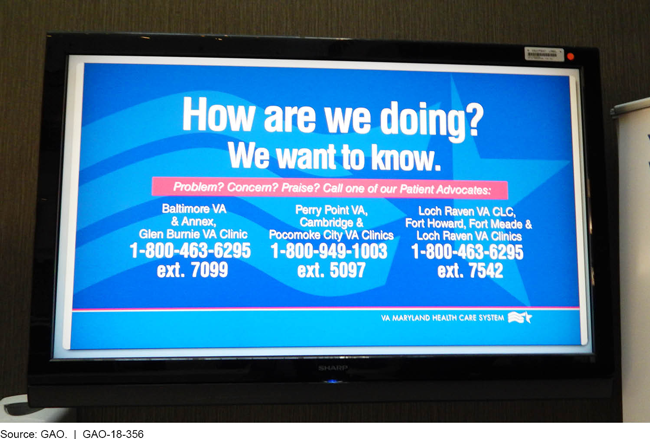 This is a photo of a sign that includes contact numbers and says "How are we doing? We want to know."

The Veterans Health Administration (VHA) provided limited guidance to Department of Veterans Affairs (VA) medical centers (VAMC) on the governance of its patient advocacy program and its guidance, a program handbook, has been outdated since 2010. VAMCs are still expected to follow the outdated handbook, which does not provide needed details on governance, such as specifying the VAMC department to which patient advocates should report. Officials from most of the VAMCs that GAO reviewed noted that the VAMC department to which patient advocates report can have a direct effect on the ability of staff to resolve veterans' complaints. The lack of updated and complete guidance may impede the patient advocacy program from meeting its expectations, to receive and address complaints from veterans in a convenient and timely manner.

VHA also has provided limited guidance to VAMCs on staffing the patient advocacy program. VHA's handbook states that every VAMC should have at least one patient advocate and appropriate support staff; however, it did not provide guidance on how to determine the number and type of staff needed. Officials at all but one of the eight VAMCs in GAO's review stated that their patient advocacy program staff had more work to do than they could accomplish. This limited guidance on staffing could impede VAMCs' efforts to ensure that they have the appropriate number and type of staff to address veterans' complaints in a timely manner.

Further, VHA has recommended training for patient advocates, but it has not developed an approach to routinely assess their training needs or monitored training completion. VHA officials stated that they relied on VAMC and Veterans Integrated Service Network (VISN) staff to conduct these activities. However, GAO found that for the eight VAMCs in its review, the training needs of patient advocates were not routinely assessed, and training completion was not always monitored. Without conducting these activities, VHA increases its risk that staff may not be adequately trained to advocate on behalf of veterans.

Finally, VHA has not monitored patient advocacy program data-entry practices or reviewed the data to assess program performance. VHA officials stated that they relied on VISN and VAMC officials to ensure that all complaints were consistently entered into VHA's Patient Advocate Tracking System (PATS). However, GAO identified inconsistencies in the extent to which VAMC officials did so. VHA's lack of monitoring may pose a risk that not all complaints are entered into this tracking system—a goal of the program. Additionally, VHA officials stated they did not systemically review data in the system to assess program performance and identify potential system-wide improvements because VHA considered this the responsibility of VAMCs. As a result, VHA officials may miss opportunities to improve veterans' experiences.

VHA is beginning to address many of these governance, staffing, training, and data issues, including directing a workgroup to provide recommendations by spring of 2018. However, because the recommendations will be advisory, and because program deadlines have slipped in the past, the nature and timing of the actions needed to resolve these issues remain unclear.

VHA has designated patient advocates at each VAMC to receive and document feedback from veterans or their representatives, including requests for information, compliments, and complaints. In recent years, the importance of a strong patient advocacy program has taken on new significance given concerns with VHA's ability to provide veterans timely access to health care, among other issues.

The Comprehensive Addiction and Recovery Act of 2016 included a provision for GAO to review VHA's patient advocacy program. This report examines the extent to which VHA has (1) provided guidance on the governance of the program; (2) provided guidance on staffing the program; (3) assessed the training needs of patient advocates and monitored training completion; and (4) monitored patient advocacy program data-entry practices and reviewed program data. GAO reviewed VHA and VAMC documents, including summaries of program data. GAO interviewed VHA officials about the program, as well as officials from a non-generalizable selection of eight VAMCs and five VISNs selected based on the volume of veteran complaints and other factors. GAO also compared VHA policies and practices to federal internal control standards.

GAO is making 6 recommendations to improve guidance for and oversight of the patient advocacy program, focusing on governance, staffing, training, and PATS data entry and assessment. VA concurred with GAO's recommendations.