Each year, the Department of Homeland Security invests billions of dollars in major acquisitions such as aircraft and surveillance technology.

We reviewed DHS's portfolio of major acquisitions and found that, in 2017, more than half of its programs needed more time and money than initially planned—an increase from 2016.

DHS has strengthened its policies for managing acquisitions as a portfolio—a practice that emphasizes prioritization of the most promising programs. This could help ensure that DHS does not pursue more programs than it can afford. We recommended DHS take steps to further improve its portfolio management.

The Department of Homeland Security's major acquisitions include a remote video surveillance system, airport screening equipment, barriers for the border, and aircraft. 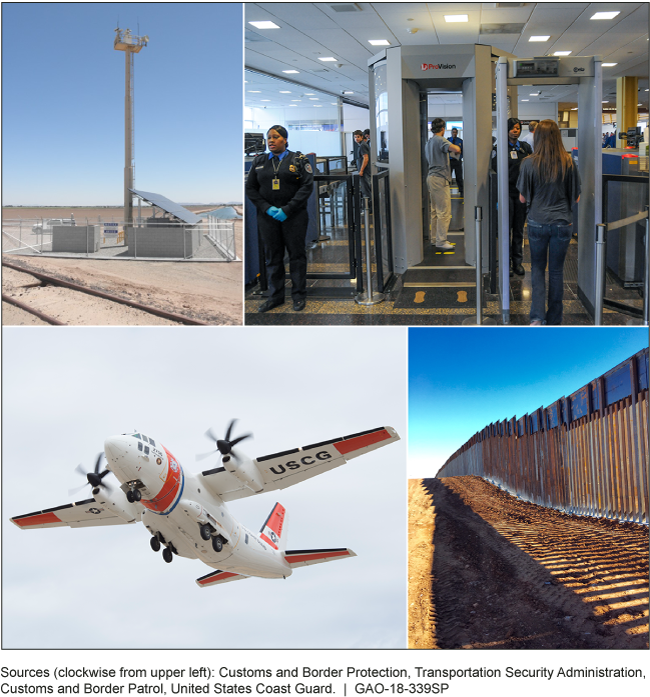 During 2017, 10 of the Department of Homeland Security (DHS) programs GAO assessed that had approved schedule and cost goals were on track to meet those goals. GAO reviewed 28 programs in total, 4 of which were new programs that GAO did not assess because they did not establish cost and schedule goals before the end of calendar year 2017 as planned. The table shows the status of the 24 programs GAO assessed. Reasons for schedule delays or cost increases included technical challenges, changes in requirements, and external factors.

Each year, the DHS invests billions of dollars in a diverse portfolio of major acquisition programs to help execute its many critical missions. DHS's acquisition activities are on GAO's High Risk List, in part, because of management and funding issues.

The Explanatory Statement accompanying the DHS Appropriations Act, 2015 included a provision for GAO to review DHS's major acquisitions. This report, GAO's fourth annual review, assesses the extent to which: (1) DHS's major acquisition programs are on track to meet their schedule and cost goals, and (2) DHS has taken actions to enhance its policies and processes to better reflect key practices for effectively managing a portfolio of investments.

GAO reviewed 28 acquisition programs, including DHS's largest programs that were in the process of obtaining new capabilities as of April 2017, and programs GAO or DHS identified as at risk of poor outcomes. GAO assessed cost and schedule progress against baselines, assessed DHS's policies and processes against GAO's key portfolio management practices, and met with relevant DHS officials.

GAO recommends DHS update its acquisition policy to require certification of fund memorandums when programs re-baseline as a result of a breach and assess programs' post-implementation reviews to improve performance across the acquisition portfolio. DHS concurred with GAO's recommendations.