The 2017 hurricane season was among the most devastating on record:

Harvey dropped over 50 inches of rain.

Irma was the strongest Atlantic hurricane on record, with peak winds of 185 miles per hour.

The U.S. mainland, the U.S. Virgin Islands, and Puerto Rico sustained an estimated $265 billion dollars in damages to date.

In this report—the first in a body of work about 2017's hurricanes—we look at contracting obligations supporting FEMA and other agencies' missions. We found, as of December 31, 2017, agencies had obligated over $5.6 billion.

As of December 31, 2017, 19 federal agencies had entered into contracts and obligated over $5.6 billion on those contracts to support efforts related to Hurricanes Harvey, Irma, and Maria. The Department of Homeland Security, including the Federal Emergency Management Agency (FEMA), and Department of Defense components, including the U.S. Army Corps of Engineers, accounted for approximately 97 percent of those obligations. (See figure below for top contracting agencies.)

Contract Obligations by Top 10 Contracting Agencies, in Support of Hurricanes Harvey, Irma, and Maria, through December 31, 2017 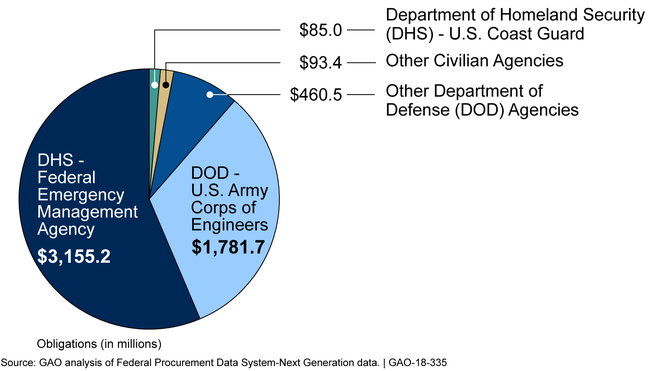 Federal agencies have obligated more than $2 billion for products, such as food, water, and shelter, and about $3.6 billion for services, such as power restoration.

The rate of competition for federal contracts was higher in the immediate aftermath of the three recent hurricanes GAO examined than for Hurricane Katrina during the same time period. Federal agencies are generally required to award contracts based on full and open competition. However, an agency may award a contract noncompetitively when the need for goods and/or services is urgent—as in the case of a natural disaster. GAO found, for the three hurricanes:

the percentage of total obligations reported under competitive contracts was 73 percent as of December 31, 2017; and

The 2017 hurricane season affected approximately 25.8 million people and caused an estimated $265 billion dollars in damages, according to FEMA and the National Oceanic and Atmospheric Administration.

GAO was asked to review federal contracting activity to support the work of FEMA and other federal agencies related to the response to the 2017 hurricanes. This is the first report in a series of GAO reports on this issue. This report provides an overview of contract obligations as of December 31, 2017, for three major hurricanes—Harvey, Irma, and Maria. Future reports on this subject will focus on the planning, execution, and monitoring of federally awarded contracts.