DOD is getting closer to completing the F-35 program, but DOD's plan to move into full-rate production without fixing key deficiencies brings into question the reliability and affordability of the aircraft.

DOD has already requested $9.8 billion for 2019 and will ask for about $10.4 billion more per year over the next two decades.

Congress should consider withholding funding from the next increment of F-35 development until DOD provides an independent cost estimate, a technology assessment, and takes other actions. In addition, we recommended that DOD resolve critical aircraft deficiencies before moving to full-rate production.

An F-35B, the short takeoff and vertical landing variant for the Marine Corps, is shown landing on USS America. 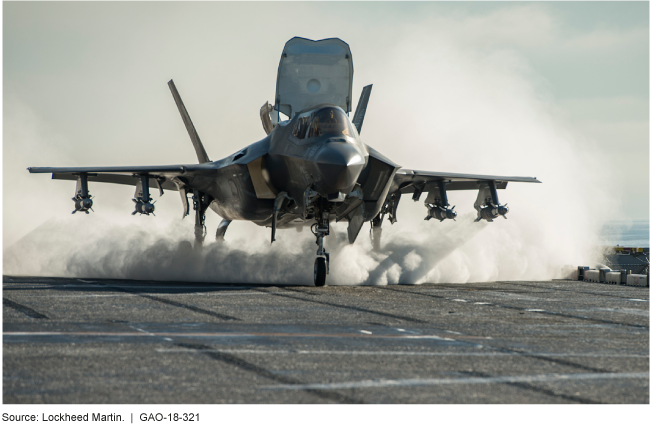 Photo of an F-35 surrounded by white smoke landing.

The Department of Defense (DOD) has made progress in completing the F-35 baseline development program, but plans to finish testing later than expected.

DOD plans to defer resolving some critical deficiencies found in testing until after its full-rate production decision in October 2019, even though DOD's policy states that critical deficiencies generally will be resolved before then. Program officials stated it is reasonable to resolve some deficiencies while in production. Any associated rework could result in additional costs to the government.

DOD plans to spend billions of dollars to modernize the F-35 with new capabilities and is requesting $278 million to begin that process before establishing a sound business case—a baseline cost and schedule estimate.

Funding Request for F-35 Modernization, Known as Block 4, Is Premature

This timing could prompt Congress to make a funding decision before DOD can provide its business case. With these funds, DOD can award a contract, making a long-term commitment to Block 4, the costs of which are not fully understood.

In 2019, DOD will decide whether to enter full-rate production for the F-35 aircraft, the most expensive and ambitious weapon acquisition program in U.S. military history. DOD has already requested the $9.8 billion it will need for 2019, and it will continue to request more over the next two decades—about $10.4 billion annually. However, the F-35 is just one program in DOD's vast acquisition portfolio, raising questions about its long-term affordability.

The National Defense Authorization Act for Fiscal Year 2015 included a provision for GAO to review the F-35 acquisition program until it reaches full-rate production. This is GAO's third report under this provision. It assesses progress of development and testing, including remaining deficiencies, and plans for spending on new capabilities.

This report was revised June 13, 2018 to correct four figures in table 1 on page 4.
Skip to Recommendations

Congress should consider providing in future appropriations that no funds shall be available for obligation for F-35 Block 4 until DOD provides a sound business case for the effort. GAO is making two recommendations to DOD, including that it resolve all critical deficiencies before full-rate production. DOD concurred with both recommendations and cited that it would resolve all critical deficiencies before its full-rate production decision.