This report provides an update on the nation's fiscal health as of the end of fiscal year 2017, and describes its likely fiscal future if policies don’t change. Among its findings:

Publicly held debt was 76 percent of GDP at the end of fiscal year 2017 and it will surpass its historical high of 106 percent within 14 to 22 years.

Other agencies join GAO in saying that the longer action is delayed, the greater and more drastic the changes will have to be.

Debt held by the public under projections from the 2017 Financial Report, the Congressional Budget Office, and GAO 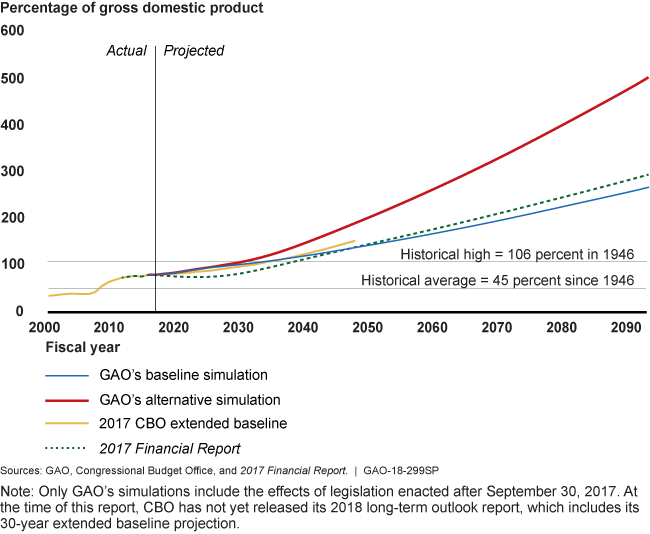 Line graph showing different increasing projections, all of which are above the historical high of 106% in 1946.

The Congress and administration face serious economic, security, and social challenges that will require difficult policy choices in the near term about the level of federal spending and investments as well as ways to obtain needed resources. At the same time, the federal government is highly leveraged in debt by historical norms.

In addition to near term financing decisions, a broader plan is needed to put the federal government on a more sustainable long-term path. This report illuminates this need by outlining the fiscal condition of the U.S. government as of the end of fiscal year 2017 and its future path absent policy changes. It draws on the recently issued Fiscal Year 2017 Financial Report of the United States Government (2017 Financial Report) and GAO’s audit of the government’s consolidated financial statements.
Significant Changes to the Government’s Fiscal Condition in Fiscal Year 2017
According to the 2017 Financial Report, the federal deficit in fiscal year 2017 increased to $666 billion—up from $587 billion in fiscal year 2016 and $439 billion in fiscal year 2015. Federal receipts increased by $48 billion, but that was outweighed by a $127 billion increase in spending, driven by Social Security, Medicare, and Medicaid, and interest on debt held by the public (net interest). Due to an increase in gross domestic product (GDP), debt held by the public fell slightly as a share of GDP, from 77 percent at the end of fiscal year 2016 to 76 percent at the end of fiscal year 2017. This compares to an average of 45 percent of GDP since 1946.
Long-Term Fiscal Projections Show the Federal Government is on an Unsustainable Fiscal Path
The 2017 Financial Report, the Congressional Budget Office (CBO), and GAO projections all show that, absent policy changes, the federal government’s fiscal path is unsustainable and that the debt-to-GDP ratio would surpass its historical high of 106 percent within 14 to 22 years (see figure). 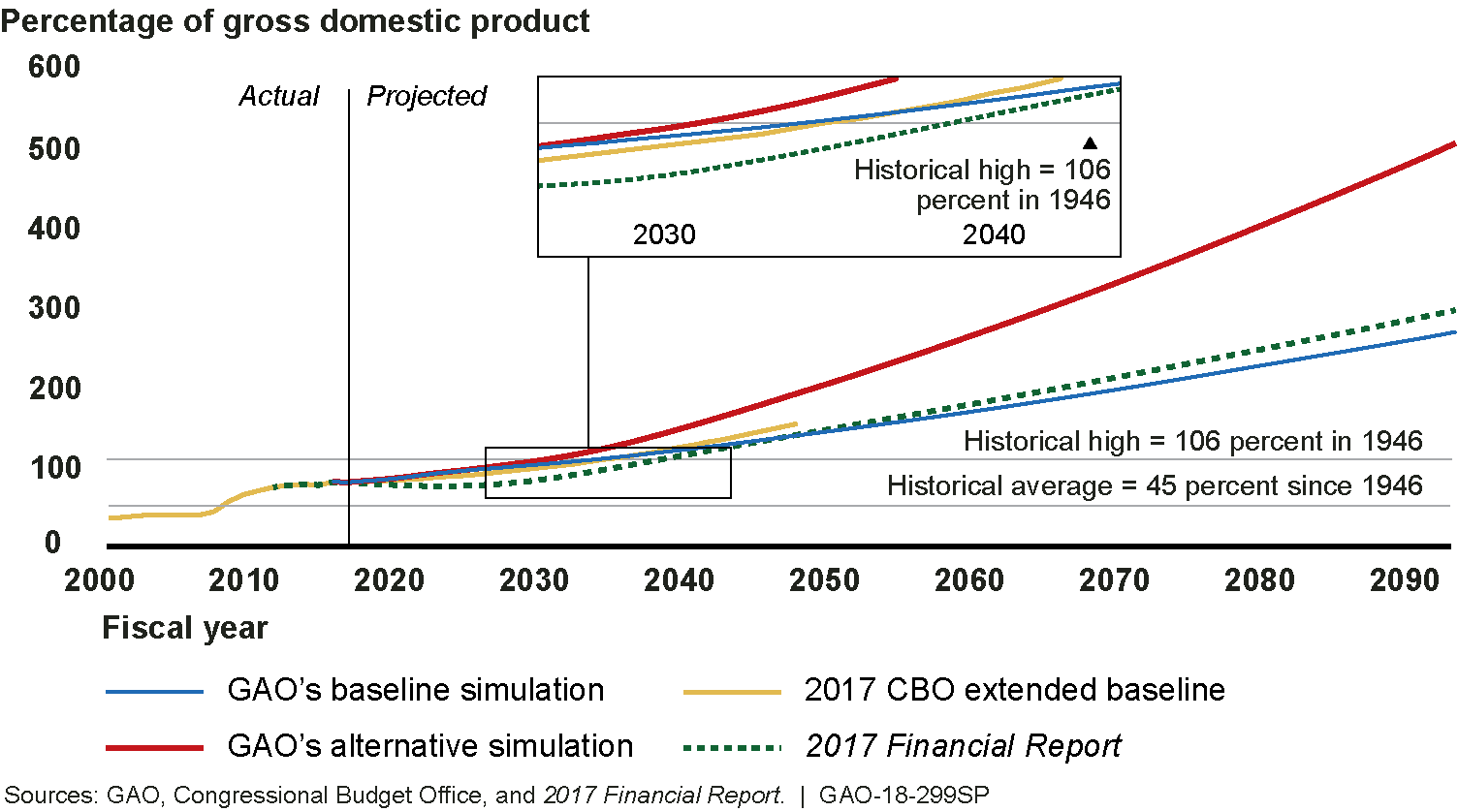 Note: Only GAO’s simulations include the effects of legislation enacted after September 30, 2017. At the time of this report, CBO has not yet released its 2018 long-term budget outlook report, which includes its 30-year extended baseline projection.
Importance of Early Action: The 2017 Financial Report, CBO, and GAO all make the point that the longer action is delayed, the greater and more drastic the changes will have to be. As shown below, Medicare’s Hospital Insurance trust fund, and Social Security’s Disability Insurance trust fund and Old-Age and Survivors Insurance trust fund are projected to face financial challenges. It is important to develop and begin to implement a long-term fiscal plan for returning to a sustainable path.

Debt Limit is Not a Control on Debt: Alternative Approach Is Needed: The current debt limit is not a control on debt, but rather an after-the-fact measure that restricts the Department of the Treasury’s authority to borrow to finance the decisions already enacted by Congress and the President. GAO has discussed possible alternative approaches to managing debt with a number of members of Congress.
Fiscal Risks Place Additional Pressure on the Federal Budget
Fiscal risks are responsibilities, programs, and activities that may legally commit or create expectations for future spending based on current policy, past practices, or other factors. These include risks stemming from unforeseen events to which the public expects a federal fiscal response, such as wars or weather-related, economic, or financial challenges.
Executive Agencies Have Opportunities to Contribute Toward Fiscal Health
Executive actions alone cannot put the U.S. government on a sustainable fiscal path, but it is important for agencies to act as stewards of federal resources. In prior work, GAO has identified numerous actions for executive agencies to contribute toward a more sustainable fiscal future.
• Actions needed to address improper payments: Reducing payments that should not have been made or that were made in an incorrect amount could yield significant savings. Reported improper payment estimates totaled almost $141 billion for fiscal year 2017. Since fiscal year 2003, cumulative estimates have totaled about $1.4 trillion.
• Multiple strategies needed to address the persistent tax gap: Reducing the gap between taxes owed and those paid could increase tax collections by billions. The annual net tax gap is estimated to be $406 billion (for tax years 2008-2010).
• Continue to address duplication, overlap, and fragmentation: GAO has identified numerous areas to reduce, eliminate, or better manage fragmentation, overlap, or duplication; achieve cost savings; or enhance revenue. Actions taken so far by Congress and the executive branch have resulted in roughly $125 billion in financial benefits from fiscal years 2010 through 2017, with at least an additional $53 billion in estimated benefits projected to be accrued in 2018 or later.
• Action needed to improve information on programs and fiscal operations: Decision-making could be improved by ensuring the government’s financial statements are fully auditable, increasing attention to tax expenditures, and effectively implementing the Digital Accountability and Transparency Act of 2014 (DATA Act).
For more information, contact Susan J. Irving at (202) 512-6806 or irvings@gao.gov.