The James Webb Space Telescope, the planned successor to the Hubble Telescope, is one of NASA’s most complex and expensive projects.

NASA recently announced that JWST's launch would be delayed several months, from October 2018 to no later than June 2019, because components of the telescope are taking longer to integrate than planned.

Based on the amount of work NASA has to complete before JWST is ready to launch, we found that it's likely the launch date will be delayed again. If that happens, the project will be at risk of exceeding the $8 billion cost cap set by Congress. 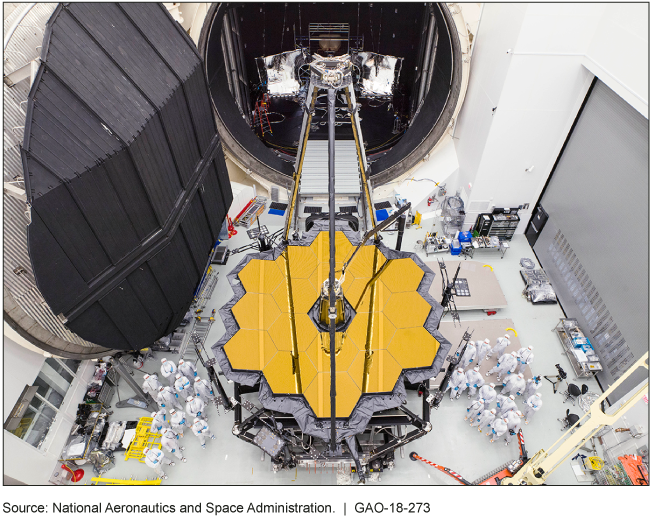 In 2017, the National Aeronautics and Space Administration's (NASA) James Webb Space Telescope (JWST) project delayed its launch readiness date by at least 5 months, and further delays are likely. The delay—from October 2018 to a launch window between March and June 2019—was primarily caused by components of JWST's spacecraft taking longer to integrate than planned. JWST made considerable progress toward the completion of integration and test activities in the past year. However, the project used all remaining schedule reserve—or extra time set aside in the schedule in the event of delays or unforeseen risks—to address technical issues, including an anomaly on the telescope found during vibration testing. Extending the launch window provided the project up to 4 months of schedule reserve. However, shortly after requesting the new launch window in September 2017, the project determined that several months of schedule reserve would be needed to address lessons learned from the initial folding and deployment of the observatory's sunshield (see image). Given remaining integration and test work ahead—the phase in development where problems are most likely to be found and schedules tend to slip—coupled with only 1.5 months of schedule reserves remaining to the end of the launch window, additional launch delays are likely. The project's Standing Review Board will conduct an independent review of JWST's schedule status in early 2018 to determine if the June 2019 launch window can be met.

JWST will also have limited cost reserves to address future challenges, such as further launch delays, and is at risk of breaching its $8 billion cost cap for formulation and development set by Congress in 2011. For several years, the prime contractor has overestimated workforce reductions, and technical challenges have prevented these planned reductions, necessitating the use of cost reserves. Program officials said that existing program resources will accommodate the new launch window—provided remaining integration and testing proceeds as planned without any long delays. However, JWST is still resolving technical challenges and work continues to take longer than planned to complete. As a result, the project is at risk of exceeding its $8 billion formulation and development cost cap.

JWST, a large, deployable telescope intended to be the successor to the Hubble Space Telescope, is one of NASA's most complex and expensive projects, at an anticipated cost of $8.8 billion. Congress set an $8 billion JWST development cost cap in 2011, and the remaining $837 million is for its operations costs. JWST is intended to revolutionize our understanding of star and planet formation and advance the search for the origins of our universe. With significant integration and testing planned for the remaining period until launch, the JWST project will still need to address many challenges during the remainder of integration and testing.

Conference Report No. 112-284, accompanying the Consolidated and Further Continuing Appropriations Act, 2012, included a provision for GAO to assess the project annually and report on its progress. This is the sixth such report. This report assesses the extent to which JWST is (1) meeting its schedule commitments, and (2) able to meet its cost commitments. GAO reviewed monthly JWST reports, reviewed relevant policies, conducted independent analysis of NASA and contractor data, and interviewed NASA and contractor officials.

GAO has made recommendations on the project in previous reports. NASA agreed with and took action on many of GAO's prior recommendations, but not on others—some of which may have provided insight to the current schedule delays. For example, in December 2012, GAO recommended that the JWST project perform an updated integrated cost/schedule risk analysis.