For some meat and poultry products such as ground beef, there are standards for how much harmful bacteria USDA can find when testing. However, some common products such as turkey breasts and pork chops don't have such standards. It's unclear how USDA decides which products to consider for new standards.

Also, we found that some of USDA's food safety standards are outdated, with no time frames for revision.

We made recommendations to help USDA improve its standards in a timely manner to protect public health.

(This page was changed for accuracy on the issue of time frames.) 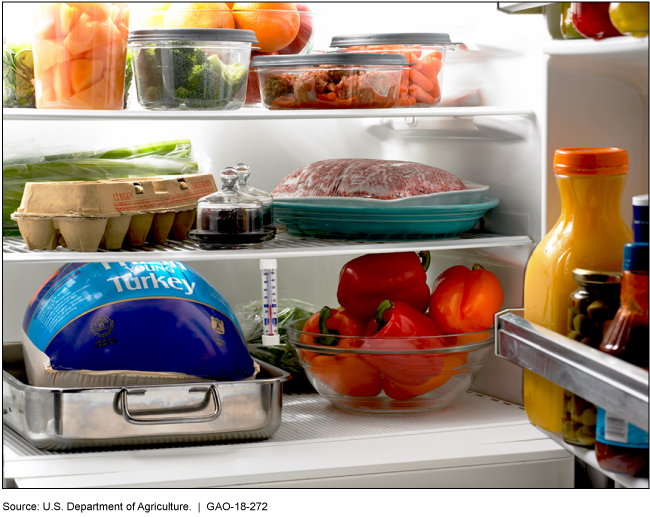 Photo of an open refrigerator showing different foods inside

To help ensure the safety of our nation's food supply, the U.S. Department of Agriculture (USDA) has developed standards limiting the amount of Salmonella and Campylobacter —pathogens that can cause foodborne illness in humans—permitted in certain meat (beef and pork) and poultry (chicken and turkey) products, such as ground beef, pork carcasses, and chicken breasts. However, the agency has not developed standards for other products that are widely available, such as turkey breasts and pork chops. Further, its process for deciding which products to consider for new standards is unclear because it is not fully documented, which is not consistent with federal standards for internal control. For example, USDA has informed stakeholders that it will take into account factors including consumption and illness data, but the agency has not documented this process going forward. Previously, USDA had developed new standards after widespread outbreaks indicated the need. For example, in 2016, USDA concluded that new standards were needed for certain poultry products to reduce Salmonella after reviewing outbreaks from these products in 2011, 2013, and 2015—outbreaks in which 794 people were sickened and 1 died. By documenting the agency's process for deciding which products to consider for new standards, USDA could better ensure that such decisions will be risk-based.

USDA is taking steps to address challenges GAO identified in 2014 for reducing pathogens in poultry products, but these challenges are ongoing and could affect USDA's ability to reduce pathogens in meat as well. For example, one challenge GAO identified is that the level of pathogens in poultry products can be affected by practices on farms where poultry are raised. GAO recommended in 2014 that to help overcome this challenge, USDA guidelines on practices for controlling Salmonella and Campylobacter on farms include information on the effectiveness of each of the practices, consistent with a recommendation from a USDA advisory committee. Since GAO's 2014 report, USDA drafted revised guidelines to include information on the effectiveness of on-farm practices for controlling pathogens in poultry and beef cattle, in 2015 and 2017, respectively. However, USDA's draft guidelines for controlling Salmonella in hogs do not contain such information. By including such information as it finalizes its draft guidelines, USDA could better inform industry of the potential benefits of adopting on-farm practices included in the guidelines and encourage implementation of such practices.

The U.S. food supply is generally considered safe, but the Centers for Disease Control and Prevention (CDC) estimate that Salmonella and Campylobacter in food cause about 2 million human illnesses per year in the United States. In 2014, GAO identified challenges USDA faced in reducing pathogens in poultry products, including standards that were outdated or nonexistent and limited control over factors that affect pathogen contamination outside of meat and poultry slaughter and processing plants, such as practices on the farm.

GAO was asked to review USDA's approach to reducing pathogens in meat and poultry products. This report examines (1) the extent to which USDA has developed standards for meat and poultry products and (2) any additional steps USDA has taken to address challenges GAO identified in 2014. GAO reviewed relevant regulations, documents, and data and interviewed officials from USDA and CDC, as well as 17 stakeholders representing industry, consumer groups, and researchers selected based on their knowledge of USDA's meat and poultry slaughter inspections and food safety.

GAO is making three recommendations, including that USDA document its process for deciding which products to consider for new standards and that it include information on the effectiveness of on-farm practices in its guidelines for Salmonella control in hogs. USDA agreed with GAO's recommendations and described actions it will take to implement them.