Customs and Border Protection coordinates with 22 other agencies to process imports, ensuring that they comply with U.S. laws. In 1994, CBP began developing an information system, the Automated Commercial Environment, to better coordinate and streamline import processing.

After delays, most key functions of the system are in use and yielding benefits. But users report problems, such as limits on messaging and file size, that can make it difficult to work within the system.

We recommended that CBP, with other agencies, finalize a plan to improve and maintain the system. 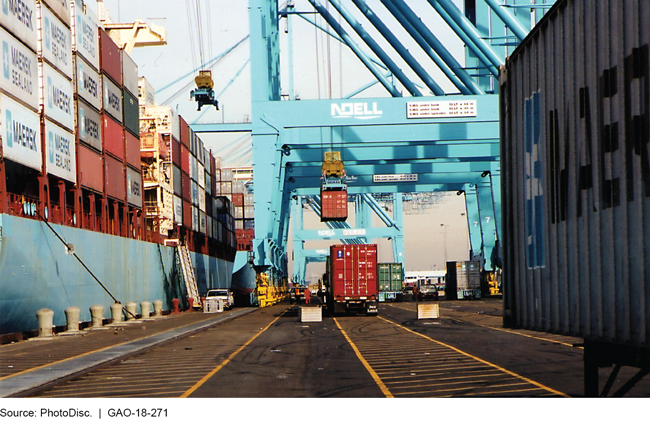 Photo of a crane offloading shipping containers at a dock.

Since renewing efforts to implement the Automated Commercial Environment (ACE) in 2013, U.S. Customs and Border Protection (CBP) has deployed a number of key ACE activities, processes, and functions that it terms core capabilities. After several delays, CBP reported that it had finished implementing these capabilities—other than a capability for revenue collections—in February 2018. CBP expects to decide how to proceed with collections by the end of March 2018, according to agency officials.

The 22 agencies CBP identified as requiring documentation to clear or license cargo are all authorized to access ACE, although GAO found considerable variation in their use of the system for import processing. For example, the Food and Drug Administration has integrated its systems with ACE and uses ACE data to review imports under its jurisdiction and target public health risks. In contrast, the Fish and Wildlife Service has not yet integrated ACE into its operations.

ACE users at CBP and partner agencies and in the trade community told GAO that using ACE has reduced costs by making trade processing more efficient and has strengthened enforcement of trade laws and regulations. CBP has developed metrics for itself and the trade community and estimated savings that could result from the increased efficiency of some processes in ACE. CBP also reported efforts to expand its metrics to capture more ACE benefits—for example, to estimate the value of increased efficiencies for partner agencies.

CBP has not yet established an approach for the management of ACE after February 2018. The agency plans to enhance ACE to address shortcomings ACE users have identified—such as difficulty in transmitting messages and required information —but has not established a process for prioritizing all suggested enhancements. CBP also has not identified funding for continued ACE development, including enhancements, after fiscal year 2018. CBP is leading an interagency effort to develop an ACE management approach that includes processes for prioritizing enhancements and sharing costs, but this approach has not been finalized. Federal guidance calls for establishing the organizational structure necessary to operate effectively and for examining efforts as needed to adopt coordinated approaches. Until processes for prioritizing ACE enhancements and sharing costs are finalized, agencies and the trade community will not realize the system's full potential benefits.

CBP began work on ACE in 1994 to update the agency's existing electronic trade processing system. In 2006, Congress broadened this effort by mandating creation of a “single portal” International Trade Data System to, among other things, efficiently regulate the flow of commerce and more effectively enforce laws and regulations relating to international trade. Performance problems halted implementation of ACE from 2010 to 2013. In 2014, the President set a deadline of December 31, 2016, for completing the system.

The Trade Facilitation and Trade Enforcement Act of 2015 included a provision for GAO to report on issues related to ACE implementation. In this report, GAO examines (1) CBP efforts to complete core ACE capabilities since 2013; (2) agencies' access to ACE and use of the system to process imports; (3) any cost savings and trade enforcement benefits from using ACE; and (4) the approach that will be used to manage ACE after core capabilities are completed. GAO reviewed information from 22 agencies as well as importers, exporters, and brokers and interviewed agency and trade community representatives.

The Secretary of Homeland Security should ensure that the Commissioner of CBP, in collaboration with partner agencies, finalizes an interagency approach to managing ACE that includes processes for prioritizing enhancements and sharing system costs. CBP concurred with GAO's recommendation.