Black students, boys, and students with disabilities were disproportionately disciplined (e.g., suspensions and expulsions) in K-12 public schools, according to GAO's analysis of Department of Education (Education) national civil rights data for school year 2013-14, the most recent available. These disparities were widespread and persisted regardless of the type of disciplinary action, level of school poverty, or type of public school attended. For example, Black students accounted for 15.5 percent of all public school students, but represented about 39 percent of students suspended from school—an overrepresentation of about 23 percentage points (see figure). 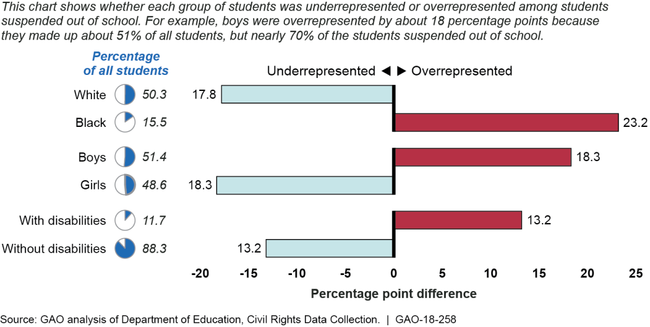 Note: Disparities in student discipline such as those presented in this figure may support a finding of discrimination, but taken alone, do not establish whether unlawful discrimination has occurred.

Officials GAO interviewed in all five school districts in the five states GAO visited reported various challenges with addressing student behavior, and said they were considering new approaches to school discipline. They described a range of issues, some complex—such as the effects of poverty and mental health issues. For example, officials in four school districts described a growing trend of behavioral challenges related to mental health and trauma. While there is no one-size-fits-all solution for the issues that influence student behavior, officials from all five school districts GAO visited were implementing alternatives to disciplinary actions that remove children from the classroom, such as initiatives that promote positive behavioral expectations for students.

Research has shown that students who experience discipline that removes them from the classroom are more likely to repeat a grade, drop out of school, and become involved in the juvenile justice system. Studies have shown this can result in decreased earning potential and added costs to society, such as incarceration and lost tax revenue. Education and Justice are responsible for enforcing federal civil rights laws that prohibit discrimination in the administration of discipline in public schools.

GAO was asked to review the use of discipline in schools. To provide insight into these issues, this report examines (1) patterns in disciplinary actions among public schools, (2) challenges selected school districts reported with student behavior and how they are approaching school discipline, and (3) actions Education and Justice have taken to identify and address disparities or discrimination in school discipline. GAO analyzed discipline data from nearly all public schools for school year 2013-14 from Education's Civil Rights Data Collection; interviewed federal and state officials, as well as officials from a total of 5 districts and 19 schools in California, Georgia, Massachusetts, North Dakota, and Texas. We selected these districts based on disparities in suspensions for Black students, boys, or students with disabilities, and diversity in size and location. We also reviewed federal laws and a non-generalizable sample of seven recently resolved federal school discipline investigations (selected in part based on the type of alleged discrimination). We incorporated technical comments from the agencies as appropriate.

The issue of who gets disciplined and why is complex. In some cases teachers are the ones who choose...
Blog Post