Fraudsters used false identities to steal at least $1.68 billion in tax refunds in 2016.

To help address fraud and compliance issues, Congress moved up the deadline for employers to submit W-2s and had IRS hold refunds for those claiming certain tax credits beginning in 2017. These changes gave IRS more time to work on identifying discrepancies before issuing refunds.

We found this process helped IRS identify and prevent fraud, but IRS could do more to maximize its potential.

We made 6 recommendations, including that IRS take steps that would allow it to review more W-2s before issuing refunds and reduce the risk of fraud and noncompliance. 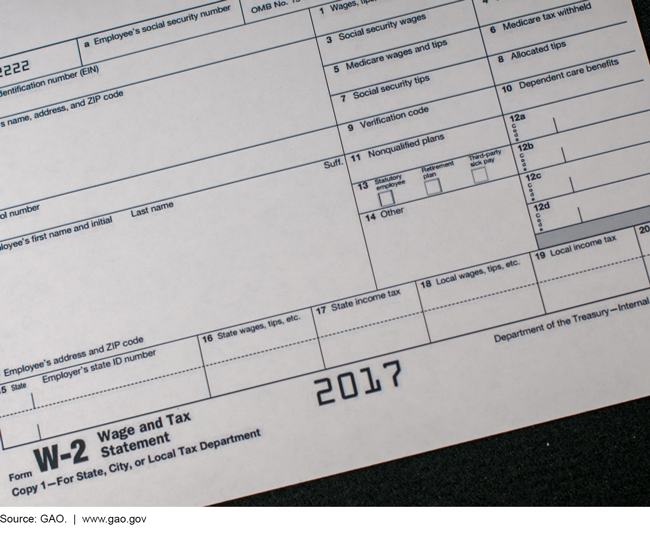 Beginning in 2017, as required by law, the Internal Revenue Service (IRS) held all refunds for taxpayers claiming the Earned Income Tax Credit (EITC) or Additional Child Tax Credit (ACTC) until February 15. IRS also took actions to verify wage and other information reported on tax returns before issuing refunds, referred to as systemic verification, but several factors limited its success. IRS received over twice as many (over 214 million) Forms W-2, Wage and Tax Statement (W-2) by February 15 compared to the same time in 2016, and reported that W-2 data were responsible for improving fraud detection and reducing taxpayer burden. However, IRS was unable to verify over half of the returns it held until February 15 before issuing the refunds. For example, IRS received W-2s daily but its information technology systems processed them weekly. In response to GAO's review, IRS reported it is planning to assess options for processing W-2s daily. Also, some employers submit W-2s late, but IRS did not track the extent to which late W-2s are associated with fraud or noncompliance. Further, IRS has not assessed options for enforcing late W-2 penalties earlier. Additionally, about 9 percent (about 23 million) of W-2s were filed on paper, which IRS does not begin to receive from the Social Security Administration (SSA) until March. By law, employers who file 250 or more W-2s are required to file W-2s electronically, while those who file fewer than 250 W-2s may opt to file on paper or electronically. In August 2014, GAO suggested that Congress provide the Secretary of the Treasury with the authority to lower the electronic filing requirement from 250 W-2s to 5 to 10. This action could also have the benefit of reducing SSA's W-2 paper processing costs by $9.7 to $11.3 million per year. These issues reduce IRS's access to timely W-2 data, limiting its ability to prevent fraud and reduce noncompliance before issuing refunds.

IRS's preliminary and final analyses of the February 15 refund hold both showed that IRS could have detected significantly more in potential fraud and noncompliance if it held all refunds until late February, when it had more W-2 data available. There are differences between these analyses. For example, the final analysis included more returns and estimated total revenue IRS could protect by extending the refund hold and expanding it to all taxpayers. In that analysis, IRS estimated that it could have protected $100 million in fraud and noncompliance had it held all taxpayer refunds until February 15—$35 million more than it protected by holding refunds with EITC or ACTC. IRS further estimated that moving the refund hold to March 1 for all taxpayers could protect $895 million compared to $533 million if it only held refunds with EITC or ACTC until that date. However, GAO found limitations to IRS's analyses. For example, while IRS has plans to further explore holding refunds longer, it does not have an evaluation plan to assess the effectiveness of the refund hold on systemic verification. Also, IRS did not fully assess the benefits and costs, including taxpayer burden, of the refund hold, nor how its analysis informs its broader fraud risk management or compliance efforts. As a result, IRS does not have sufficient information to inform a decision on potential changes to the refund hold date and those subjected to it. Finally, IRS has not assessed the benefits and costs of expanding systemic verification to use for pre-refund compliance checks in other areas such as income underreporting and employment fraud. Therefore, IRS may be missing opportunities to maximize use of early W-2 data.

IRS continues to confront the ongoing problems of identity theft (IDT) refund fraud. The agency estimates that at least $1.68 billion was paid in IDT refund fraud in 2016. To help address this issue, consistent with GAO's prior reporting, the Protecting Americans from Tax Hikes Act of 2015 advanced the deadline for employers to file W-2s to SSA to January 31 (about 1 to 2 months earlier than in prior years). This change allows IRS more time to match wage information to tax returns through systemic verification, and identify any discrepancies before issuing refunds.

GAO recommends IRS collect data to track late W-2 filing penalties and assess options for earlier enforcement; assess the benefits and costs of using existing authority to hold refunds longer, hold all refunds, or both, and expanding systemic verification to other areas; and take actions based on the assessments. IRS listed steps to respond to 5 of 6 recommendations, but said it could not enforce penalties earlier. GAO recognizes the challenges but clarified that assessing other options would provide benefits, as discussed in the report.

What Happens When People Don’t Pay Their Taxes?