Results of the 2020 Census will be used to apportion congressional seats, redraw districts, and allocate federal assistance. But the Census Bureau faces challenges, including:

Controlling costs, estimated at $15.6 billion for 2020, up $3 billion from its original estimate.

Counting a larger population in light of a historical decline in response rates.

Managing development and security of IT systems.

We testified that management issues and development delays have increased risks to systems. We have made recommendations in past reports to improve census management and mitigate risks.

The Average Cost of Counting Each Housing Unit (in 2020 Dollars) Has Escalated Each Decade, While the Percentage of Mail Response Rates Has Declined 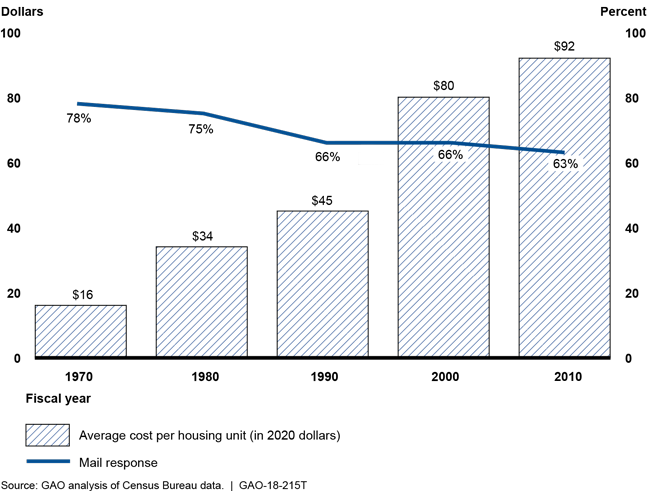 Bar chart showing the increase in cost per counting each housing unit, decrease in mail response between 1970 and 2010

GAO added the 2020 Census to its high-risk list because of challenges associated with (1) developing and testing key innovations; (2) implementing and securing IT systems; and (3) controlling any further cost growth and preparing reliable cost estimates. The Census Bureau (Bureau) is planning several innovations for the 2020 Decennial Census, including re-engineering field operations by relying on automation, using administrative records to supplement census data, verifying addresses in-office using on-screen imagery, and allowing the public to respond using the Internet. These innovations show promise for controlling costs, but they also introduce new risks, in part because they have not been used extensively in earlier enumerations, if at all. As a result, robust testing is needed to ensure that key systems and operations will function as planned. However, citing budgetary uncertainties, the Bureau canceled its 2017 field test and then scaled back its 2018 End-to End Test. Without sufficient testing, operational problems can go undiscovered and the opportunity to improve operations will be lost, as key census-taking activities will not be tested across a range of geographic locations, housing types, and demographic groups.

The Bureau continues to face challenges in managing and overseeing the information technology (IT) programs, systems, and contracts supporting the 2020 Census. For example, GAO's ongoing work indicates that the system development schedule leading up to the 2018 End-to-End test has experienced several delays. Further, the Bureau has not addressed several security risks and challenges to secure its systems and data, including making certain that security assessments are completed in a timely manner and that risks are at an acceptable level. Given that certain operations for the 2018 End-to-End Test began in August 2017, it is important that the Bureau quickly address these challenges. GAO plans to monitor the Bureau's progress as part of its ongoing work.

In addition, the Bureau needs to control any further cost growth and develop cost estimates that reflect best practices. Earlier this month, the Department of Commerce (Department) announced that it had updated the October 2015 life-cycle cost-estimate and now projects the life-cycle cost of the 2020 Census will be $15.6 billion, more than $3 billion (27 percent) increase over its earlier estimate. The higher estimated life-cycle cost is due, in part, to the Bureau's failure to meet best practices for a quality cost-estimate. The Bureau and Department are still finalizing the documentation used to develop the $15.6 billion cost-estimate. Until these documents are complete and made available for inspection, GAO cannot determine the reliability of the estimate.

The Decennial Census by the Numbers

One of the Bureau's most important functions is to conduct a complete and accurate decennial census of the U.S. population. The decennial census is mandated by the Constitution and provides vital data for the nation. A complete count of the nation's population is an enormous undertaking as the Bureau seeks to control the cost of the census, implement operational innovations, and use new and modified IT systems. In recent years, GAO has identified challenges that raise serious concerns about the Bureau's ability to conduct a cost-effective count. For these reasons, GAO added the 2020 Census to its High-Risk list in February 2017.

In light of these challenges, GAO was asked to testify about the reasons the 2020 Census was placed on the High-Risk List. To do so, GAO summarized its prior work regarding the Bureau's planning efforts for the 2020 Census. GAO also included observations from its ongoing work on the 2018 End-to-End Test. This information is related to, among other things, recent decisions on preparations for the 2020 Census; progress on key systems to be used for the 2018 End-to-End Test, including the status of IT security assessments; execution of the address canvassing operation at the test sites; and efforts to update the life-cycle cost estimate.

Over the past decade, we have made 84 recommendations specific to the 2020 Census to address the issues raised in this testimony and others. The Bureau generally has agreed with our recommendations. As of October 2017, 36 recommendations had not been implemented.