Puerto Rico's debt grew to 66% of GDP and the territory is now in default. Its financial future is unclear until debt restructuring is complete.

The U.S. Virgin Islands' debt grew to 72% of GDP. It's uncertain if financial reform will let the territory borrow at favorable rates again.

At 11% and 16% of GDP, respectively, American Samoa and Northern Mariana Islands had lower debt relative to the size of their economies.

Map of the U.S. Territories 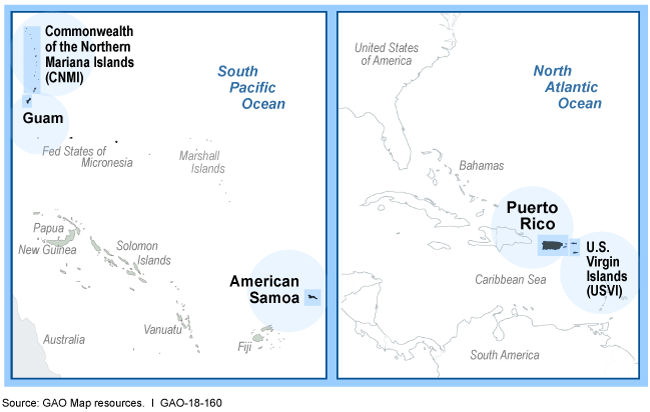 American Samoa: American Samoa's public debt more than doubled in fiscal year 2015 to $69.5 million, but remained small relative to its economy, with a debt to GDP ratio of 10.9 percent. American Samoa's debt was primarily used to fund infrastructure projects. Between fiscal years 2005 and 2015, revenues grew and the government's net position was positive and generally improving. GAO previously reported that American Samoa relies heavily on the tuna processing and canning industry. Disruptions in this industry could affect its ability to repay debt.

Commonwealth of the Northern Mariana Islands (CNMI): CNMI's public debt declined from $251.7 million to $144.7 million between fiscal years 2005 and 2015, decreasing CNMI's debt to GDP ratio to 16 percent. Most of CNMI's debt was used to refinance prior debt and fund infrastructure projects. Despite revenue growth since fiscal year 2011, CNMI's net position was negative and generally declining during the period. GAO previously reported that labor shortages may affect GDP. This could impede CNMI's ability to repay debt in the future.

Guam: Between fiscal years 2005 and 2015, Guam's public debt more than doubled from almost $1 billion to $2.5 billion, with a debt to GDP ratio of 44 percent for fiscal year 2015. Most of Guam's debt was used to comply with federal requirements and court orders. Revenue grew during this period, and net position fluctuated significantly, with a negative balance in fiscal year 2015. Despite recent and expected economic growth, GAO found that large unfunded pension and other post-employment benefit (OPEB) liabilities may present a risk.

U.S. Virgin Islands (USVI): Between fiscal years 2005 and 2015, USVI's public debt nearly doubled, reaching $2.6 billion and a debt to GDP ratio of 72 percent. Since 2010, most of USVI's debt was used to fund general government operations. Revenue remained stagnant and net position was negative and declining during the period, reflecting a deteriorating financial position. While USVI holds a year's worth of debt service payments in reserve, GAO found that economic uncertainty and looming government pension fund insolvency by 2023 may hamper repayment. In early 2017, USVI was unable to access capital markets to issue new debt at favorable rates. Although the government adopted a financial plan intended to reduce expenditures and increase revenue, the plan does not address USVI's significant unfunded pension and OPEB liabilities and it is unclear whether the plan will produce the intended level of savings.

The United States has five territories: Puerto Rico, American Samoa, CNMI, Guam, and USVI. The territories, like U.S. states in some cases, borrow through financial markets. Puerto Rico in particular has amassed large amounts of debt, and defaulted on billions of dollars of debt payments. In response to the fiscal crisis in Puerto Rico, Congress enacted and the President signed the Puerto Rico Oversight, Management, and Economic Stability Act (PROMESA) in June of 2016, which established an Oversight Board with broad powers of budgetary and financial control over Puerto Rico and requires GAO to study fiscal issues in all five U.S. territories.