Savvy customers may seek the lowest prices when choosing to have their neighbor’s kid mow their lawn, but may think twice when selecting a surgeon.

DOD faces a similar choice—it may use the "lowest price technically acceptable" process and pay less or use a "trade-off" process and possibly pay more if additional benefits outweigh the higher cost. 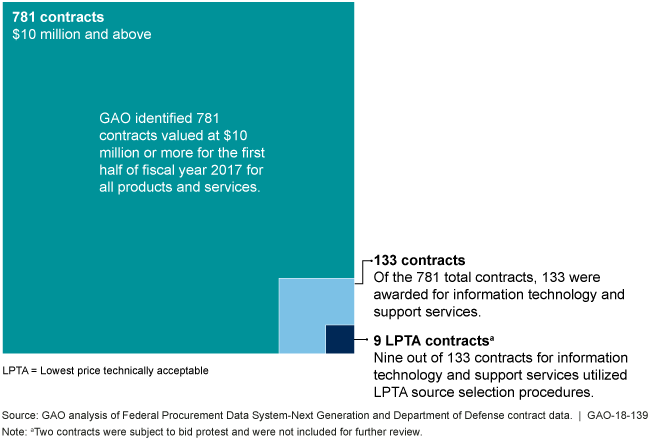 During the first half of fiscal year 2017, the Army, Navy, and Air Force rarely used lowest price technically acceptable (LPTA) source selection procedures when awarding contracts valued at $10 million or more for the types of services identified by the National Defense Authorization Act, such as information technology services. Department of Defense (DOD) guidance states that LPTA procedures are typically for requirements that are well-defined, commercial, or non-complex products or services with a minimal risk of unsuccessful contract performance. The figure shows the military departments' limited use of LPTA procedures for contracts for selected services.

aTwo contracts were subject to bid protest and were not included for further review.

For the 7 contracts that GAO reviewed, contracting officials determined that the government would not receive a benefit for paying more than the lowest price. Contracting officials also stated that LPTA was used, in part, because the requirements were well-defined, non-complex, or reoccurring. For example, the Navy used LPTA procedures to award a contract for commercially available monthly telephone maintenance services. In addition, the Air Force used LPTA procedures to award a contract for mail sorting and delivery. Section 813 of the fiscal year 2017 National Defense Authorization Act requires DOD to amend its regulations to require contracting officers to consider specific criteria when deciding to use LPTA procedures. DOD has not yet revised its regulations to implement Section 813. Nevertheless, for the 7 contracts GAO reviewed, contracting officials' considerations when choosing to use LPTA procedures were often consistent with most of these new criteria. DOD officials are currently developing the revisions to the Defense Federal Acquisition Regulation Supplement that are contemplated by Section 813.

DOD obligated about $300 billion through contracts for goods and services in fiscal year 2016. When awarding a contract competitively, DOD may use the LPTA source selection process to select the lowest-priced offer that is technically acceptable. In contrast, DOD may use the trade-off source selection process to award a higher-priced contract to a firm if the firm's offer provides greater benefit and it is worth paying the additional cost. The National Defense Authorization Act for Fiscal Year 2017 calls on DOD to avoid using the LPTA process for information technology, cybersecurity, and other knowledge-based professional support services.

GAO reviewed data from the Federal Procurement Data System-Next Generation to identify 781 contracts valued at $10 million or above awarded by the Army, Navy, and Air Force in the first half of fiscal year 2017, the most recent period for which data were available. GAO then selected 133 of these contracts for information technology and support services, which include services reflected in the Act. GAO identified that 9 contracts used LPTA procedures and reviewed 7 of these, including interviewing officials and reviewing contract documents.

DOD had no comments on the draft report.