Most of the illicit drugs consumed in the United States come from other countries in the Western Hemisphere. For example, most of the heroin and cocaine reaching the U.S. market originates in Mexico and Colombia, respectively. Congress established the Western Hemisphere Drug Policy Commission in 2016 to evaluate the activities of U.S. counternarcotics programs in the region.

We reviewed these activities and found that, between 2010 and 2015, federal agencies spent about $39 billion to counter drug trafficking in the Western Hemisphere. There have also been a variety of federal efforts to collect and share best practices from these activities. 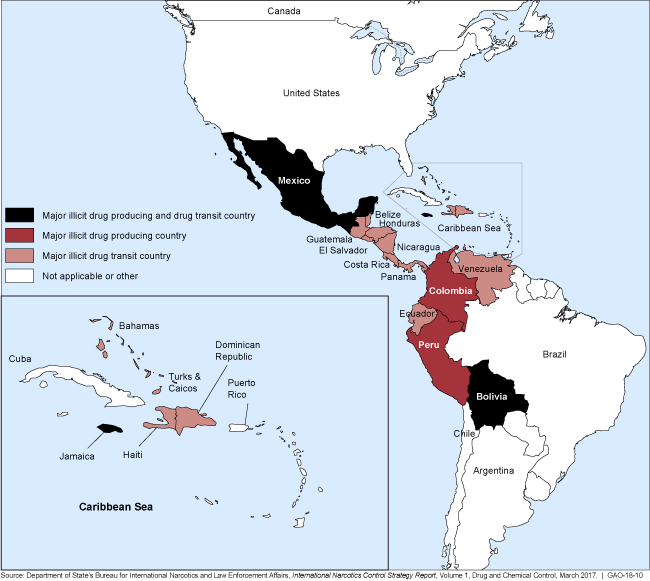 The Office of National Drug Control Policy (ONDCP), which coordinates the National Drug Control Program, facilitates the sharing of best practices and lessons learned at meetings such as the North American Drug Dialogue workshop, including Canada, Mexico, and the United States. In addition, 7 of the 10 agencies GAO reviewed described processes they have in place for identifying and collecting best practices or lessons learned from counternarcotics efforts in the Western Hemisphere. For example, DOD reported using a process, known as the Joint Lessons Learned Program, that consists of five phases: discovery, validation, resolution, evaluation, and dissemination.

U.S. agencies use a variety of mechanisms to address changing narcotics conditions in the Western Hemisphere. ONDCP collaborates with agencies working directly on regional counternarcotics efforts to address emerging threats, as reflected in the annually updated National Drug Control Strategy and the Southwest Border Counternarcotics Strategy. In addition, documentary evidence GAO reviewed showed that a variety of interagency groups, task forces, and committees have been created to coordinate the U.S. government's responses to counternarcotics threats. For example, the National Heroin Coordination Group was established to provide guidance aimed at reducing the growing supply of heroin and illicit fentanyl in the U.S. market.

Western Hemisphere nations such as Mexico and Colombia are major sources of illicit drugs such as cocaine, heroin, methamphetamine, and marijuana. Precursor chemicals used in the production of illicit fentanyl and other dangerous synthetic drugs often originate in China but typically enter the United States through Canada and Mexico. U.S. agencies implementing the National Drug Control Strategy conduct several activities to disrupt the flow of illicit drugs and dismantle the organizations that control them (see fig.). In December 2016, Congress established the Western Hemisphere Drug Policy Commission to, among other things, evaluate the U.S.-funded counternarcotics programs in the Western Hemisphere.

In this context, GAO was asked to review key issues related to U.S. counternarcotics efforts in the Western Hemisphere. This report examines (1) U.S. agencies' spending for counternarcotic efforts in the Western Hemisphere during fiscal years 2010-2015, the most recent data available; (2) how agencies are gathering and sharing best practices and lessons learned from their counternarcotics efforts domestically and internationally; and (3) mechanisms U.S. agencies have used to address changing drug threats. GAO analyzed agencies' data and documents, interviewed agency officials, and conducted fieldwork at the U.S. Southern Command and Joint Interagency Task Force South in Florida.

GAO is not making any recommendations in this report. Several agencies provided technical comments on a draft of this report which we incorporated as appropriate.