The GPRA Modernization Act was designed to help the federal government address longstanding performance and management problems. Among other things, it requires agency leaders to set goals and use data to review progress toward them.

We surveyed more than 4,000 federal managers and found overall use of performance data in decision making has dropped since 2007. However, the survey shows that data-driven reviews agencies conducted for a subset of goals did improve program performance.

We recommended that OMB work with agencies to identify and share practices for conducting performance reviews for additional goals. 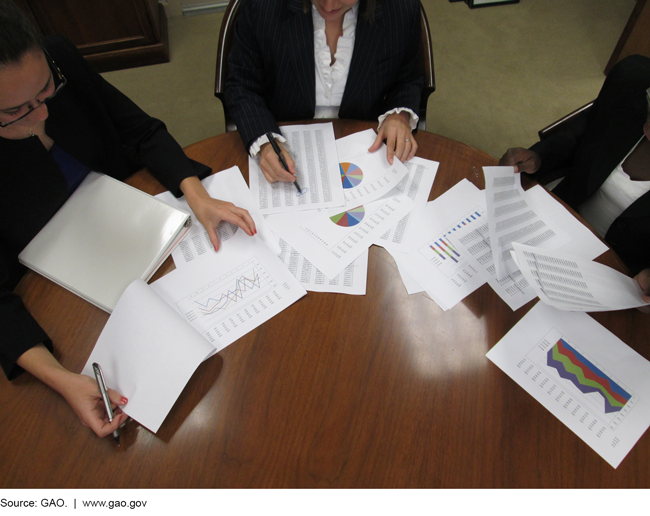 The Office of Management and Budget (OMB) and agencies have made some progress in more fully implementing the GPRA Modernization Act (GPRAMA), but GAO's work and 2017 survey of federal managers highlight numerous areas where improvements are needed.

Cross-cutting issues: Various GPRAMA provisions are aimed at addressing cross-cutting issues, such as cross-agency and agency priority goals and related data-driven reviews of progress towards those goals. To ensure alignment with the current administration's priorities, OMB's 2017 guidance removed the priority status of those goals, which stopped quarterly data-driven reviews and related public progress reports until new goals are published. OMB plans to resume implementation of these provisions in February 2018. GPRAMA also requires OMB and agencies to implement an inventory of federal programs, which could help decision makers better identify and manage fragmentation, overlap, and duplication. OMB and agencies implemented the inventory once, in May 2013. In October 2014, GAO found several issues limited the usefulness of that inventory. Since then, OMB has postponed updating the inventory, citing among other reasons the passage of subsequent laws. OMB has yet to develop a systematic approach for resuming implementation of the inventory and specific time frames for doing so. A systematic approach to developing the inventory could help ensure it provides useful information for decision makers and the public.

Daily operations: Agencies have made progress in developing results-oriented cultures but need to take additional actions. GAO's past work found that high-performing organizations use performance management systems to help individuals connect their daily activities to organizational goals. In 2017, about half of federal managers reported using performance information when setting expectations with employees (no change from GAO's last survey in 2013).

Transparent and open government: GAO's past work identified a number of needed improvements to Performance.gov, the central government-wide website required by GPRAMA. The site is to provide quarterly updates on priority goals in effect through September 2017, but those updates stopped in December 2016. According to OMB, the existing information for cross-agency priority goals is the final update, and agencies should publish final updates on their priority goals in annual performance reports. Performance.gov does not provide users with this information, thereby limiting the transparency and accessibility of those results.

Full implementation of GPRAMA could facilitate efforts to reform the federal government and make it more effective. GPRAMA includes a provision for GAO to review the act's implementation. This report assesses how GPRAMA implementation has affected the federal government's progress in resolving key governance challenges in (1) addressing cross-cutting issues, (2) ensuring performance information is useful and used, (3) aligning daily operations with results, and (4) building a more transparent and open government.

To address these objectives, GAO reviewed statutory requirements, OMB guidance, and GAO's recent work related to GPRAMA implementation and the key governance challenges. GAO also interviewed OMB staff and surveyed a stratified random sample of 4,395 federal managers from 24 agencies on various performance and management topics. With a 67 percent response rate, the survey results are generalizable to the government-wide population of managers.

In addition to following through on plans to resume implementation of key GPRAMA provisions, GAO recommends that OMB (1) consider a systematic approach to developing the program inventory, (2) revise guidance to provide specific time frames for inventory implementation, (3) identify and share practices for expanding the use of data-driven reviews, and (4) update Performance.gov to explain that reporting on priority goals was suspended and provide the location of final progress updates. OMB staff agreed with these recommendations.