The James Webb Space Telescope—NASA’s planned successor to the Hubble telescope—is on track to make its launch date in October 2018 and stay within its $8.8 billion budget. Most of the major project components have been delivered, and are now being integrated and tested. 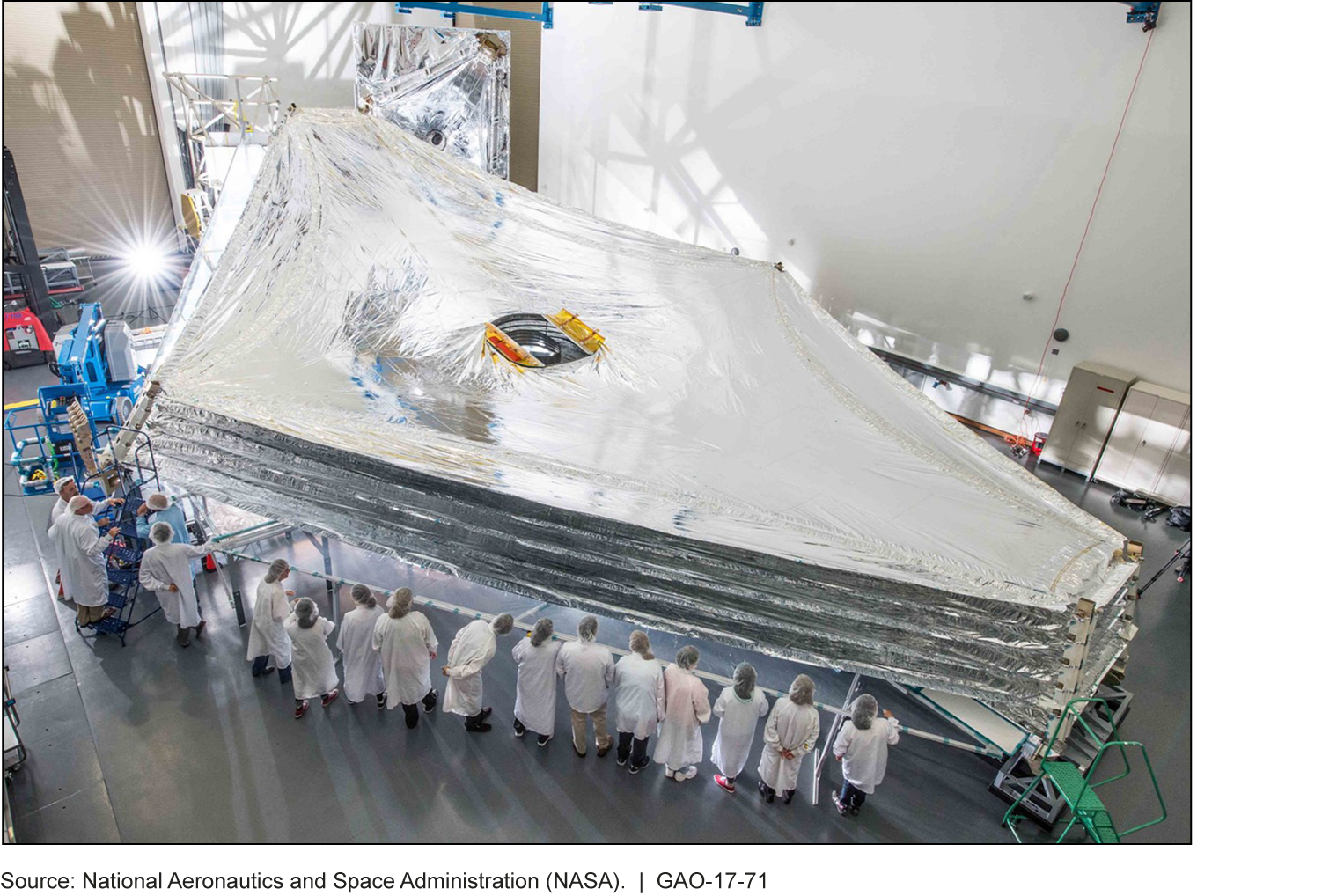 Five stacked layers of JWST's sunshield, which protects the spacecraft from the heat of the sun.

The National Aeronautics and Space Administration's (NASA) James Webb Space Telescope (JWST) project is still operating within its committed schedule while in its riskiest phase of development, integration and test. Most hardware deliveries and two of five major integration and test efforts have been completed. Two other integration and test efforts are underway, with the final effort to begin in fall 2017. JWST used about 3 months of schedule reserve since GAO's last report in December 2015. For example, the project used one month of schedule reserve to address delays in integrating the Optical Telescope Element and the Integrated Science Instrument module, due to the complexity of this effort. The project's remaining 6 months of reserve is more than required by Goddard Space Flight Center requirements, as determined by project officials. The figure below shows JWST's elements and major subsystems, the schedule reserve remaining for each, and the critical path—the schedule with the least amount of reserve.

aIn 2015, the ISIM and OTE elements were in separate integration efforts. In 2016, they were integrated into the OTIS element and are depicted as a single integration and test effort.

JWST is one of NASA's most technologically complex science projects and has numerous risks and single points of failure, which need to be tested and understood before launch. The project also faces a number of risks related to the observatory software. Looking ahead, the project will likely need to consume more reserves for its complex integration and test efforts.

JWST is meeting its cost commitments despite technical and workforce challenges. Although the project used $42.8 million more than planned for fiscal year 2016, it is maintaining spending within the levels dictated by the 2011 replan. NASA continues to emphasize that maintaining schedule is the priority, which resulted in the use of the fiscal year 2016 cost reserves to meet technical challenges. Also, as GAO previously found in December 2015, the observatory contractor has continued to maintain a larger workforce for longer than planned in order to address technical issues. For example, in 2016, the observatory contractor averaged 165 full-time equivalents more than projected to address technical issues while minimizing the impact on schedule. The contractor submitted a proposal to NASA this summer to cover cost overruns, which was the first such proposal since the replan in 2011.

JWST is one of NASA's most complex and expensive projects, at an anticipated cost of $8.8 billion. Now in the midst of significant integration and testing that will last the 2 remaining years until the planned October 2018 launch date, the JWST project will need to continue to address many challenges and identify problems, some likely to be revealed during its rigorous testing. The continued success of JWST hinges on NASA's ability to anticipate, identify, and respond to these challenges in a timely and cost-effective manner to meet its commitments.

Conference Report No. 112-284, accompanying the Consolidated and Further Continuing Appropriations Act, 2012, included a provision for GAO to assess the project annually and report on its progress. This is the fifth such report. This report assesses the extent to which JWST is (1) managing technological and developmental challenges to meet its schedule commitments, and (2) meeting its committed cost levels and managing its workforce plans. To conduct this work, GAO reviewed monthly JWST reports, reviewed relevant policies, conducted independent analysis of NASA and contractor data, and interviewed NASA and contractor officials.

We think about our reports all the time—even when we watch movies. As a tribute to our single...
Chuck Young
Managing Director
youngc1@gao.gov
(202) 512-4800
Space
ContractorsCost overrunsEmployeesRisk factorsSoftwareSpace explorationTechnologyTestingWorkforce planningCost and schedule