Federal agencies also provide such things as training and equipment to support capacity-building in other Western Hemisphere countries. State and Treasury allocated about $63 million to support such efforts from 2011-15, with funding concentrated in several countries, including Mexico. 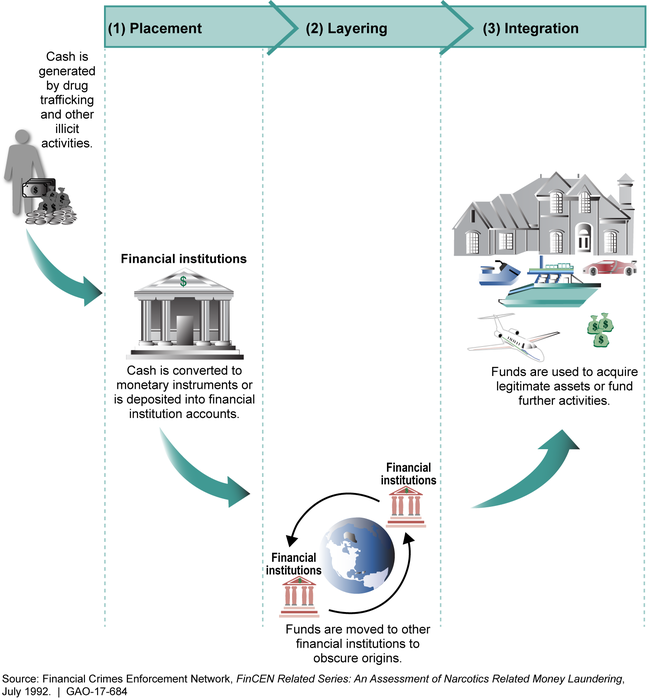 U.S. financial regulators oversee and monitor compliance with anti-money laundering (AML) requirements of the Bank Secrecy Act (BSA) to prevent, detect, and deter the laundering of proceeds from narcotics trafficking and other illicit activities using a risk-based examination approach. The Department of the Treasury's (Treasury) Financial Crimes Enforcement Network (FinCEN) administers the BSA and related AML regulations, which provides the legal framework for combating money laundering. The BSA includes requirements for financial institutions to retain various records of customer transactions, verify customers' identity, maintain effective AML programs, and report suspicious transactions. FinCEN relies on a variety of U.S. financial regulators and agencies to help FinCEN oversee and monitor financial institutions' compliance with the BSA. U.S. financial regulators and FinCEN also collaborate directly with counterparts in other Western Hemisphere countries and through international working groups to identify and reduce risks to the financial sector by sharing information and analysis on financial crimes.

The Departments of State (State) and Treasury support AML capacity-building and technical assistance efforts in other Western Hemisphere countries in collaboration with the Departments of Justice and Homeland Security and other federal agencies. For example, Treasury provides training to support the development of legal and regulatory frameworks in partner countries consistent with international standards to prevent money laundering. Similarly, State funds such training and provides equipment to financial intelligence units in these countries to help them detect illicit financial transactions. In fiscal years 2011 through 2015, State and Treasury allocated about $63 million to support AML-related capacity-building and technical assistance in the region, of which $52 million was from State (see figure).

Proceeds from narcotics-related illicit activities are one of the most common sources of money laundering in the United States. Though difficult to accurately determine, in 2015, Treasury estimated that drug trafficking generated about $64 billion annually from U.S. sales. Moreover, the Western Hemisphere accounts for about a third of the jurisdictions designated by State as of primary concern for money laundering.

GAO reviewed laws and regulations; interviewed experts and U.S. officials; reviewed documents and examined State's and Treasury's budget data for fiscal years 2011 through 2015, the most recent at the time of the review, for anti-money laundering activities. GAO selected Colombia, Mexico, and Panama—three principal recipients of AML support—for site visits, in part, because each country was designated a major drug transit or illicit drug-producing country from fiscal years 2014 through 2016.