Political appointees at federal agencies serve at the pleasure of the President. However, agencies can select appointees on their merits to "convert" them to career civil service positions.

Some conversions can raise questions of favoritism or unfair advantage, so the Office of Personnel Management reviews all conversion requests to ensure compliance with civil service laws.

While agencies seem to have followed the laws for OPM-approved conversions, most of the case files we looked at didn't have enough evidence. For example, if OPM reviewed evidence online, it wasn't copied or saved.

Selected Departments and Agencies with the Most Completed Political Conversions

Pie chart showing that 57.9% of conversions were completed by 8 departments or agencies, with detail.

The Office of Personnel Management (OPM) approved 78 of 99 requests to convert political appointees to career positions agencies proposed to complete from January 1, 2010, through March 17, 2016. OPM denied 21 requests for varying reasons, such as bypassing qualified veterans, and referred 9 denied cases to the Office of Special Counsel (OSC). Of the 78 approved requests, agencies followed through and converted 69 political appointees to career positions. During the period, agencies completed 7 conversions without obtaining OPM approval; OPM completed post-appointment reviews for 4 of these 7 conversions, denying all 4. For each of the 4 denied cases, the agencies undertook various remedies, such as readvertising positions, in response to OPM's concerns. OPM did not complete a review for the 3 other conversions because the appointees were no longer in the career positions to which they were converted. 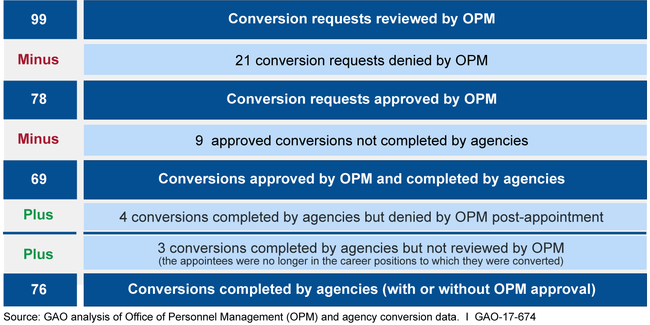 Agencies appeared to have used appropriate authorities and followed proper procedures for each of the 78 OPM approved requests. GAO's review of OPM's case files and additional documentation from agencies supported OPM's conclusion that each of these conversions appeared to be free of political influence and complied with merit system principles. However, for 55 of the 78 requests, OPM's case files did not provide enough information for GAO to initially support OPM's approvals of the requests. GAO could only decide after obtaining and reviewing supporting documentation directly from involved agencies.

OPM's procedures for reviewing political conversion requests do not specify which agency documents it should save into case files. Further, OPM's procedures do not require its staff to verify they have reviewed agency documentation required by OPM checklists. OPM officials told GAO that it is drafting a records schedule to be completed by the end of calendar year 2017 for maintaining political conversion files. Without this schedule, OPM risks not maintaining complete documentation to justify conversion request decisions.

Federal agencies must use appropriate authorities and follow proper procedures in converting political appointees to career positions, including obtaining prior approval from OPM.

GAO obtained and corroborated OPM data on the number of political conversions OPM reviewed and agencies intended to complete from January 1, 2010, through March 17, 2016. GAO also assessed OPM's reviews of all approved political conversion requests during the same period.

GAO recommends that OPM (1) ensure its finalized records schedule lists all documentation that must be saved in OPM's case files, and (2) establish a policy requiring its staff to verify they reviewed all documentation required by OPM checklists before recommending approval or denial of a conversion request. OPM partially concurred with both recommendations, but believes it has a process to thoroughly review conversion requests. GAO continues to believe the recommendations are valid, as discussed in the report.