Radioisotope power systems enable NASA to conduct space exploration missions where solar or other power sources are not feasible (such as in deep space). These systems convert heat generated by the natural decay of plutonium 238 (Pu-238), a scarce resource, into electricity.

In 2015, the Department of Energy produced new Pu-238 for the first time since 1988. However, this process is highly technical and the department faces challenges meeting NASA's expected need for Pu-238.

We recommended that the department improve its planning and communication about the challenges it faces in producing Pu-238. 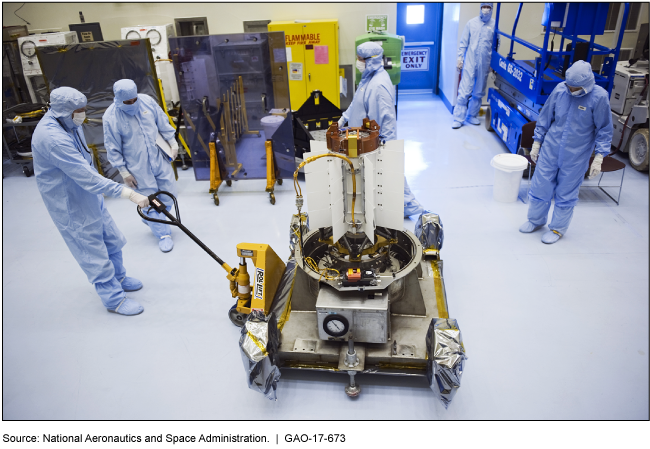 Photo of a radioisotope power system at Kennedy Space Center

The National Aeronautics and Space Administration (NASA) selects radioisotope power systems (RPS) for missions primarily based on the agency's scientific objectives and mission destinations. Prior to the establishment of the Department of Energy's (DOE) Supply Project in fiscal year 2011 to produce new plutonium-238 (Pu-238), NASA officials said that Pu-238 supply was a limiting factor in selecting RPS-powered missions. After the initiation of the Supply Project, however, NASA officials GAO interviewed said that missions are selected independently of decisions on how to power them. Once a mission is selected, NASA considers power sources early in its mission review process. Multiple factors could affect NASA's demand for RPS and Pu-238. For example, high costs associated with RPS and missions can affect the demand for RPS because, according to officials, NASA's budget can only support one RPS mission about every 4 years. Expected technological advances in RPS efficiency could reduce NASA's demand for RPS and Pu-238.

DOE has made progress in reestablishing Pu-238 production to meet NASA's future demand to fuel RPS and has identified challenges to meeting its production goals. Specifically, since the start of the Supply Project, DOE has produced 100 grams of Pu-238 and expects to finalize production processes and produce interim quantities by 2019. However, DOE has also identified several challenges to meeting the Supply Project goal of producing 1.5 kilograms (kg) of new Pu-238 per year by 2026. DOE officials GAO interviewed said that DOE has not perfected the chemical processing required to extract new Pu-238 from irradiated targets to meet production goals. These officials also said that achieving the Pu-238 production goal is contingent on the use of two reactors, but only one reactor is currently qualified for Pu-238 production while the second reactor awaits scheduled maintenance. Moreover, while DOE has adopted a new approach for managing the Supply Project and RPS production—based on a constant production approach—the agency has not developed an implementation plan that identifies milestones and interim steps that can be used to demonstrate progress in meeting production goals and addressing previously identified challenges. GAO's prior work shows that plans that include milestones and interim steps help an agency to set priorities, use resources efficiently, and monitor progress in achieving agency goals. By developing a plan with milestones and interim steps for DOE's approach to managing Pu-238 and RPS production, DOE can show progress in implementing its approach and make adjustments when necessary. Lastly, DOE's new approach to managing the Supply Project does not improve its ability to assess the potential long-term effects of challenges DOE identified, such as chemical processing and reactor availability, or to communicate these effects to NASA. For example, DOE officials did not explain how the new approach would help assess the long-term effects of challenges, such as those related to chemical processing. Under Standards for Internal Control in the Federal Government , agencies should use quality information to achieve objectives and to communicate externally, so that external parties can help achieve agency objectives. Without the ability to assess the long-term effects of known challenges and communicate those effects to NASA, DOE may be jeopardizing NASA's ability to use RPS as a power source for future missions.

NASA uses RPS to generate electrical power in missions in which solar panels or batteries would be ineffective. RPS convert heat generated by the radioactive decay of Pu-238 into electricity. DOE maintains a capability to produce RPS for NASA missions, as well as a limited and aging supply of Pu-238 that will be depleted in the 2020s, according to NASA and DOE officials and documentation. With NASA funding, DOE initiated the Pu-238 Supply Project in 2011, with a goal of producing 1.5 kg of new Pu-238 per year by 2026. Without new Pu-238, future NASA missions requiring RPS are at risk.

GAO is making three recommendations, including that DOE develop a plan with milestones and interim steps for its Pu-238 and RPS production approach, and that DOE assess the long-term effects of known production challenges and communicate these effects to NASA. DOE concurred with GAO's recommendations.