The Department of Defense has a history of investing in innovative technologies, allowing the United States to maintain superiority on the battlefield and beyond. Now that commercial science and tech firms—"non-traditional companies"—are on the leading edge of innovation, DOD relies on them for new products and ideas.

The trouble is many non-traditional companies find the cost of doing business with DOD to be expensive, slow, and cumbersome. In this report, we look at what some of their key challenges are and how DOD is addressing them. 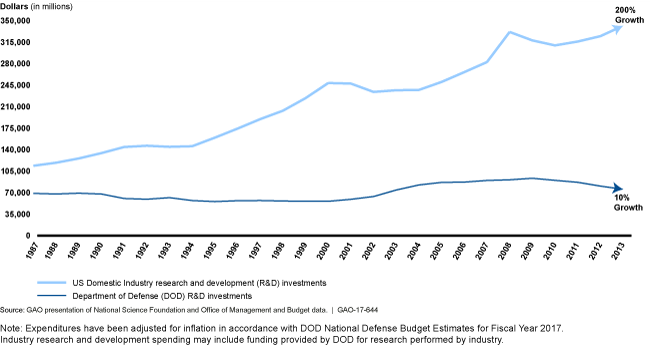 Challenges That Deter Companies from Developing Products for Military Use

According to these company representatives, collectively these challenges have created an environment where companies choose to either not pursue DOD business or believe that their resources could be better spent pursuing commercial business where the cost to compete is lower and selection decisions are made faster. For example, 1 of the 12 companies GAO spoke with conducted a cost comparison study and found that it took 25 full time employees, 12 months and millions of dollars to prepare a proposal for a DOD contract. In contrast, the study found that the company used 3 part time employees, 2 months, and only thousands of dollars to prepare a commercial contract for a similar product.

DOD is taking steps to implement some of the requirements that Congress mandated in recent legislation to address some of these challenges, as well as implementing other innovative solutions. For example, as required by Congress, DOD established an advisory panel to identify opportunities to streamline the acquisition process, including recommending regulations that should be eliminated. The panel, which consists of 18 current and former DOD executives, expects to issue a final report in 2018. Each of the military services also has efforts underway to shorten their contracting process. In addition, DOD established an innovation unit in April 2015 to reach out to companies that do not typically do business with the department and facilitate business agreements within a desired period of 60 days using the process below.

Because many of the steps and initiatives that DOD is undertaking are in the early stages of implementation, it is too early at this time to determine whether they will address all of the challenges identified by companies that normally do not do business with the department.

Private industry investments in research and development have significantly outpaced DOD's own spending in this area over the past three decades. Recognizing that this situation is likely to continue, Congress has passed legislation aimed at enabling DOD to leverage technologies made by companies that do not typically do business with it, referred to in this report as non-traditional companies.

To perform this work, GAO conducted interviews with 12 non-traditional companies. Companies were selected based on size, the amount of business they had with DOD, and the type of technology they produce. GAO discussed the nature of the challenges identified with the companies. In addition, GAO obtained information from DOD on steps it is taking to mitigate identified challenges through document reviews and interviews with military service and Office of the Secretary of Defense officials.

Although GAO is not making recommendations, DOD reviewed a draft of this report and had no comments.