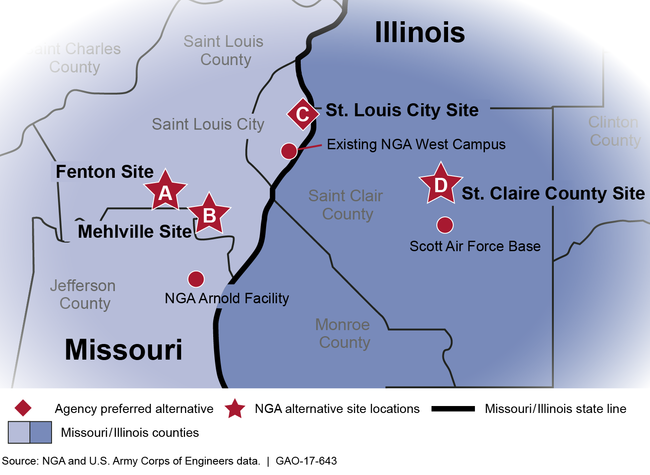 NGA's process for selecting a site for the new NGA West campus substantially met three of the four characteristics of a high-quality, reliable AOA process. Specifically, NGA's process substantially met the characteristics that demonstrate a well-documented, comprehensive, and unbiased AOA process. It partially met the credibility characteristic, in part because it did not fully include information on the risks and sensitivities to cost estimates. NGA officials stated that there was no comprehensive DOD guidance to inform its AOA process, and although NGA's AOA process is complete, NGA plans to develop full cost estimates as part of construction, planning, and design. In September 2016, GAO recommended that DOD develop guidance for the use of AOA best practices for certain types of military construction decisions. While DOD did not concur and the recommendation remains open, GAO continues to believe such guidance would help ensure that future AOA processes are reliable and would result in decisions that best meet mission needs.

NGA, a defense agency and element of the Intelligence Community, provides geospatial intelligence to military and intelligence operations to support national security priorities. It currently operates out of two primary facilities—its headquarters in Springfield, Virginia, and its NGA West campus in St. Louis, Missouri. In 2012, NGA determined that a new location for its NGA West facilities was necessary to meet security standards and better support its national security mission. NGA estimates that the construction of the new campus will cost about $945 million.

GAO was asked to evaluate the AOA process that NGA used to select the site for its new campus. This report (1) describes the process NGA used, including the key factors it considered and (2) evaluates the extent to which the AOA process met best practices for such analyses.

GAO visited the existing NGA West campus and the final four alternative sites that were considered, analyzed and assessed reports and information that document NGA's AOA process for selecting the site, and interviewed relevant officials about the process. GAO evaluated NGA's process against best practices identified by GAO as characteristics of a high-quality, reliable AOA process.

GAO is not making recommendations to NGA. In commenting on a draft of this report, NGA expressed concerns about GAO's assessment of NGA's estimates of cost risks and sensitivities. GAO continues to believe its assessment accurately reflects NGA's process.