The Nuclear Command, Control, and Communications (NC3) system is meant to keep the President connected to military forces in the instance of a nuclear event. NC3 is made up of a multitude of ground, air, and space components, such as receivers and terminals.

We found that the Air Force made progress on its oversight structure for the entire NC3 Weapon System, but it has not yet focused on long-term NC3 needs. And although selected NC3 acquisition programs progressed towards their goals, concerns remain. For example, four programs have compressed schedules that could result in delays if unexpected issues arise. 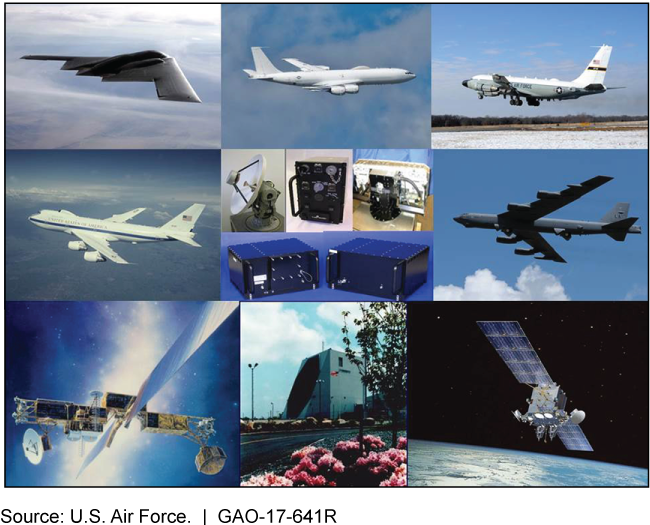 The Air Force has continued to take steps to provide an Air Force-wide nuclear command, control, and communications (NC3) oversight structure for the NC3 Weapon System, but its focus has mainly been on sustaining the current system as it added personnel for this new structure. According to Air Force officials, the Air Force has built up its understanding of the short-term sustainment needs for the component systems that currently make up the NC3 Weapon System, but has not had the resources to focus on the long-term needs for NC3.

Each of the eight NC3 acquisition programs GAO reviewed has made progress towards meeting its acquisition goals, but most have challenges remaining. For example, four programs have compressed schedules that could result in delays if any issues develop during development, production, or installation of the communication terminals. In addition, two programs with draft schedules plan to proceed into development without benefiting from a key systems engineering event that would help to ensure the requirements are feasible and affordable before development contracts are awarded. NC3 program executive office officials stated that they plan to review the acquisition strategies and adjust them as appropriate before the acquisition approaches are finalized.

NC3 is a large and complex system comprised of numerous land-, air-, sea-, and space-based components used to ensure connectivity between the President and nuclear forces. The Department of Defense (DOD) is executing several acquisition efforts to modernize elements of NC3. In addition, the Air Force, which is responsible for the majority of DOD NC3 assets, has begun establishing an oversight structure for its NC3 capabilities and programs.

Since 2013, GAO has issued several products related to reviews of NC3, as well as provided classified briefings to congressional defense committees. Most recently, in June 2015, GAO issued a report on several NC3 modernization efforts, and in January 2017, GAO issued a classified report on briefings provided in May and June 2016 regarding the Air Force's efforts to establish its new NC3 oversight structure and on the status of several NC3 modernization efforts.

The Senate Armed Services Committee report accompanying a bill for the National Defense Authorization Act for Fiscal Year 2016 included a provision for us to update prior reviews of NC3. This is the second phase of work in response to that provision. GAO provided in-depth, classified briefings to congressional defense committee staff on the results of this phase in May and June 2017, which expanded on findings in the January 2017 report. This report is an unclassified summary of the classified briefings, which discussed (1) the extent to which the Air Force has made progress in establishing a new oversight structure for its NC3 capabilities and programs and (2) an updated status of several ongoing acquisition programs, selected because they were either the largest efforts in terms of estimated cost, or they address critical NC3 capabilities.

To understand the Air Force's NC3 oversight structure, GAO reviewed Air Force assessments and planning documents and discussed the plans with cognizant officials. To understand and assess the acquisition progress and remaining challenges for each acquisition program, GAO reviewed relevant acquisition and management documents, including the most recent program updates, and identified acquisition risks where the programs' ongoing and planned efforts are not consistent with acquisition best practices. GAO discussed the status of each program with officials from the relevant program offices.

GAO is not making any recommendations in this report. We provided a draft of this product to DOD for comment. The department responded that it had no formal comments.