When federal agencies find that some of their annual reports to Congress are outdated or duplicative, they can propose to eliminate or modify related reporting requirements.

A 2010 law directs the Office of Management and Budget to coordinate an annual review of agencies' plans and reports.

The reviews have led to new proposals and elimination of some required reports. However, OMB does not coordinate this effort every year.

Among other things, we recommended that OMB adjust its process to comply with the law. 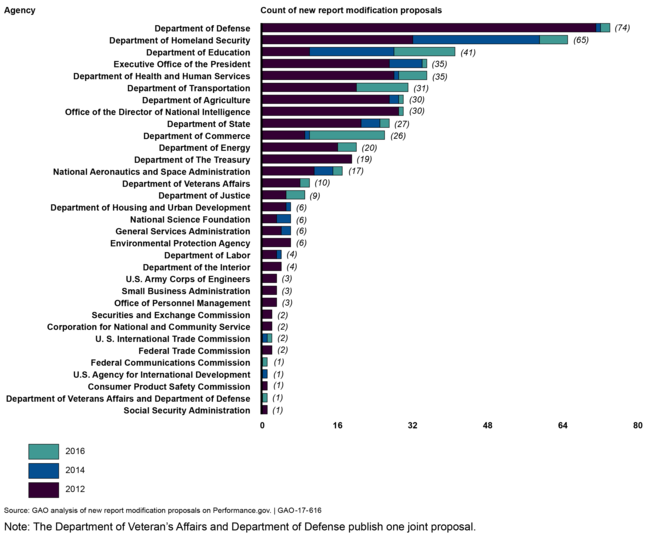 The GPRA Modernization Act of 2010 (GPRAMA) requires the Office of Management and Budget (OMB) to coordinate an annual review of agencies' plans and reports for Congress and publish proposals to eliminate or modify reports that may be outdated or duplicative. Since the passage of GPRAMA, OMB posted three lists of proposals (in 2012, 2014, and 2016) on Performance.gov. These lists contained a total of 523 new proposals. In 2014, Congress acted on agencies' report modification proposals by eliminating 51 reporting requirements, including 34 that were identified through this process.

As shown in the figure, GAO found that OMB did not implement the report modification process on an annual basis, as required by GPRAMA. OMB staff said that they implemented the report modification process every other year because reporting requirements are relatively static. OMB staff said, in future years, they plan to implement the process annually as required.

GAO also found that OMB is publishing agencies' proposals on Performance.gov, rather than in the President's annual budget as GPRAMA requires. OMB staff said that they published the proposals online rather than in the budget because the website hosts many GPRAMA resources. However, publishing or referencing the proposals in the President's annual budget, in addition to posting them on Performance.gov, may increase their visibility and usefulness to congressional decision makers and others. GAO also found that OMB's email instructions to agencies did not align with GPRAMA and Circular A-11 directives for agencies to review a complete list of reports, which could have resulted in a missed opportunity to identify additional report modification proposals. OMB staff stated that their email instructions are not a substitute for A-11 guidance, but also acknowledged that the instructions could have led to missed opportunities.

The federal government produces thousands of plans and reports each year to meet the informational needs of Congress. GPRAMA established a process to eliminate or modify reports that may be outdated or duplicative.

GAO was asked to examine OMB and agencies' implementation of GPRAMA provisions to identify unnecessary reports and develop proposals to eliminate or modify them as appropriate. GAO's objectives were to (1) review agencies' report modification proposals, (2) assess the extent to which OMB and agencies implemented related GPRAMA requirements, and (3) describe how selected federal agencies determined which plans and reports are outdated or duplicative.

GAO recommends that OMB submit or reference report modification proposals with the President's annual budget, and ensure that email instructions to agencies align with GPRAMA and Circular A-11 guidance. OMB staff agreed with the recommendations.