Using surplus motors from intercontinental ballistic missiles to launch commercial spacecraft is against U.S. law, in part because it could discourage innovation in the U.S. space launch industry.

We examined potential DOD pricing of these motors and what the effects would be of changing the law to allow use on commercial launches.

Negatively affecting investment and competition in the space launch industry 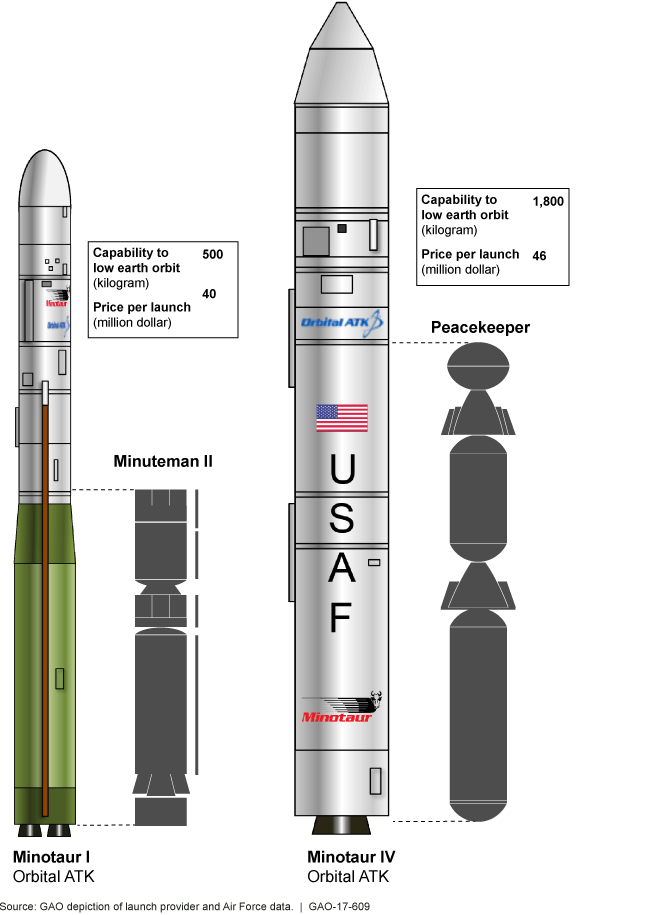 Graphic of the Minotaur I and IV missiles showing their capabilities, price per launch, components

The Department of Defense (DOD) could use several methods to set the sale prices of surplus intercontinental ballistic missile (ICBM) motors that could be converted and used in vehicles for commercial launch if current rules prohibiting such sales were changed. One method would be to determine a breakeven price. Below this price, DOD would not recuperate its costs, and, above this price, DOD would potentially save. GAO estimated that DOD could sell three Peacekeeper motors—the number required for one launch, or, a “motor set”—at a breakeven price of about $8.36 million and two Minuteman II motors for about $3.96 million, as shown below. Other methods for determining motor prices, such as fair market value as described in the Federal Accounting Standards Advisory Board Handbook, resulted in stakeholder estimates ranging from $1.3 million per motor set to $11.2 million for a first stage Peacekeeper motor.

The prices at which surplus ICBM motors are sold is an important factor for determining the extent of potential benefits and challenges of allowing the motors to be used for commercial launch. Potential benefits include

increasing the global competitiveness of U.S. launch services, and

expanding the workload of the Air Force program office responsible for maintaining and refurbishing the motors.

Further, uncertainties in underlying assumptions and cost estimates—such as Peacekeeper motor storage and disposal costs—could hinder effective decision making. DOD is also conducting a study on the potential effects of allowing surplus ICBM motors to be used for commercial launch. Because DOD's study is not completed, it is not clear the extent to which its study addresses such uncertainties.

The U.S. government spends over a billion dollars each year on launch activities as it strives to help develop a competitive market for space launches and assure its access to space. Among others, one launch option is to use vehicles derived from surplus ICBM motors such as those used on the Peacekeeper and Minuteman missiles. The Commercial Space Act of 1998 prohibits the use of these motors for commercial launches and limits their use in government launches in part to encourage the development of the commercial space launch industry in the United States. Legislative and policy changes would be needed to allow DOD to sell these motors for use on commercial launches.

GAO used Office of Management and Budget criteria to develop a range of breakeven prices, collected detailed motor storage and disposal costs from the Air Force, reviewed industry stakeholder responses to an Air Force request for information about other pricing methods, and interviewed DOD and industry officials.