The Navy's Ford-Class aircraft carrier was meant to improve combat capability while reducing costs. However, we've found that the first version of this ship cost over $2 billion more than estimated. We recently reviewed the second Ford-Class ship, and found that the Navy is again underestimating its cost—potentially to the tune of hundreds of millions of dollars.

We recommended that the Navy develop a more accurate cost estimate for the second ship, and obtain independent cost estimates before requesting funding for future Ford-Class ships. 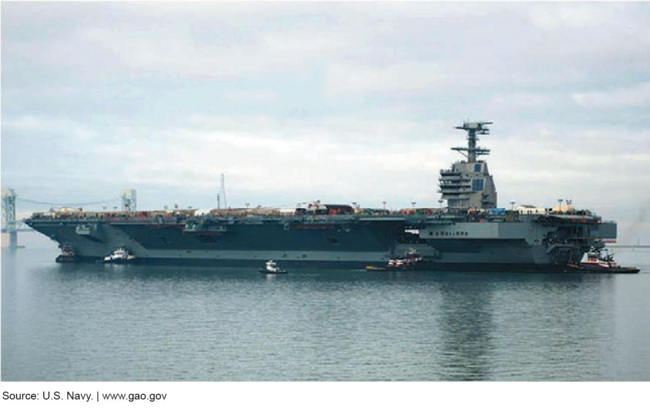 The first aircraft carrier in the Navy's Ford Class.

The cost estimate for the second Ford-Class aircraft carrier, CVN 79, is not reliable and does not address lessons learned from the performance of the lead ship, CVN 78. As a result, the estimate does not demonstrate that the program can meet its $11.4 billion cost cap. Cost growth for the lead ship was driven by challenges with technology development, design, and construction, compounded by an optimistic budget estimate. Instead of learning from the mistakes of CVN 78, the Navy developed an estimate for CVN 79 that assumes a reduction in labor hours needed to construct the ship that is unprecedented in the past 50 years of aircraft carrier construction, as shown in the figure below.

After developing the program estimate, the Navy negotiated 18 percent fewer labor hours for CVN 79 than were required for CVN 78. CVN 79's estimate is optimistic compared to the labor hour reductions calculated in independent cost reviews conducted in 2015 by the Naval Center for Cost Analysis and the Office of Cost Assessment and Program Evaluation. Navy analysis shows that the CVN 79 cost estimate may not sufficiently account for program risks, with the current budget likely insufficient to complete ship construction.

The Navy's current reporting mechanisms, such as budget requests and annual acquisition reports to Congress, provide limited insight into the overall Ford Class program and individual ship costs. For example, the program requests funding for each ship before that ship obtains an independent cost estimate. During an 11-year period prior to 2015, no independent cost estimate was conducted for any of the Ford class ships; however, the program received over $15 billion in funding. In addition, the program's Selected Acquisition Reports (SAR)—annual cost, status, and performance reports to Congress—provide only aggregate program cost for all three ships currently in the class, a practice that limits transparency into individual ship costs. As a result, Congress has diminished ability to oversee one of the most expensive programs in the defense portfolio.

This is a public version of a sensitive but unclassified report that GAO issued in March 2017. Information the Department of Defense deemed sensitive has been removed. Areas where redactions occurred are noted in the body of the report.

The Navy intended for the Ford Class aircraft carrier to improve combat capability while reducing acquisition and life-cycle costs. However, as GAO has reported on extensively since 2007, the lead ship has experienced cost growth of nearly 23 percent, with a reduced capability expected at delivery. CVN 78 is estimated to cost $12.9 billion, while the next ship, CVN 79, is estimated to be $11.4 billion. The Navy plans to buy 1-2 more ships in the coming years.

The Senate Armed Services Committee Report accompanying the National Defense Authorization Act for Fiscal Year 2016 included a provision that GAO review Ford-class cost estimates, among related issues. This report assesses: (1) the extent to which the CVN 79 cost estimate is a reliable basis for meeting the cost cap and addresses known cost risks from the lead ship, and (2) the extent to which oversight mechanisms provide Congress with insight into ship costs. To do this work, GAO compared the CVN 79 cost estimate with GAO's Cost Estimating and Assessment Guide, analyzed cost reports, and interviewed relevant officials.

The Navy should develop a new, reliable cost estimate for CVN 79 validated by cost reviews and obtain an independent cost estimate before requesting funding for future ships. The Navy partially concurred with these recommendations, but did not concur with a draft recommendation to prepare a SAR for each Ford class ship. In response to comments, GAO revised the recommendation to focus on SAR cost and funding summaries.