Are women veterans getting the medical care they need?

The Department of Veterans Affairs has policies in place to help ensure the privacy, safety, and dignity of women veterans when they receive care at its medical facilities. For example, exam rooms must have privacy curtains and exam tables must face away from doors.

However, we found many instances of noncompliance with these policies. We also found that 27 percent of VA medical facilities lacked an onsite gynecologist.

We recommended that VA improve its oversight of care for women veterans, including monitoring access to services such as gynecology and maternity care. 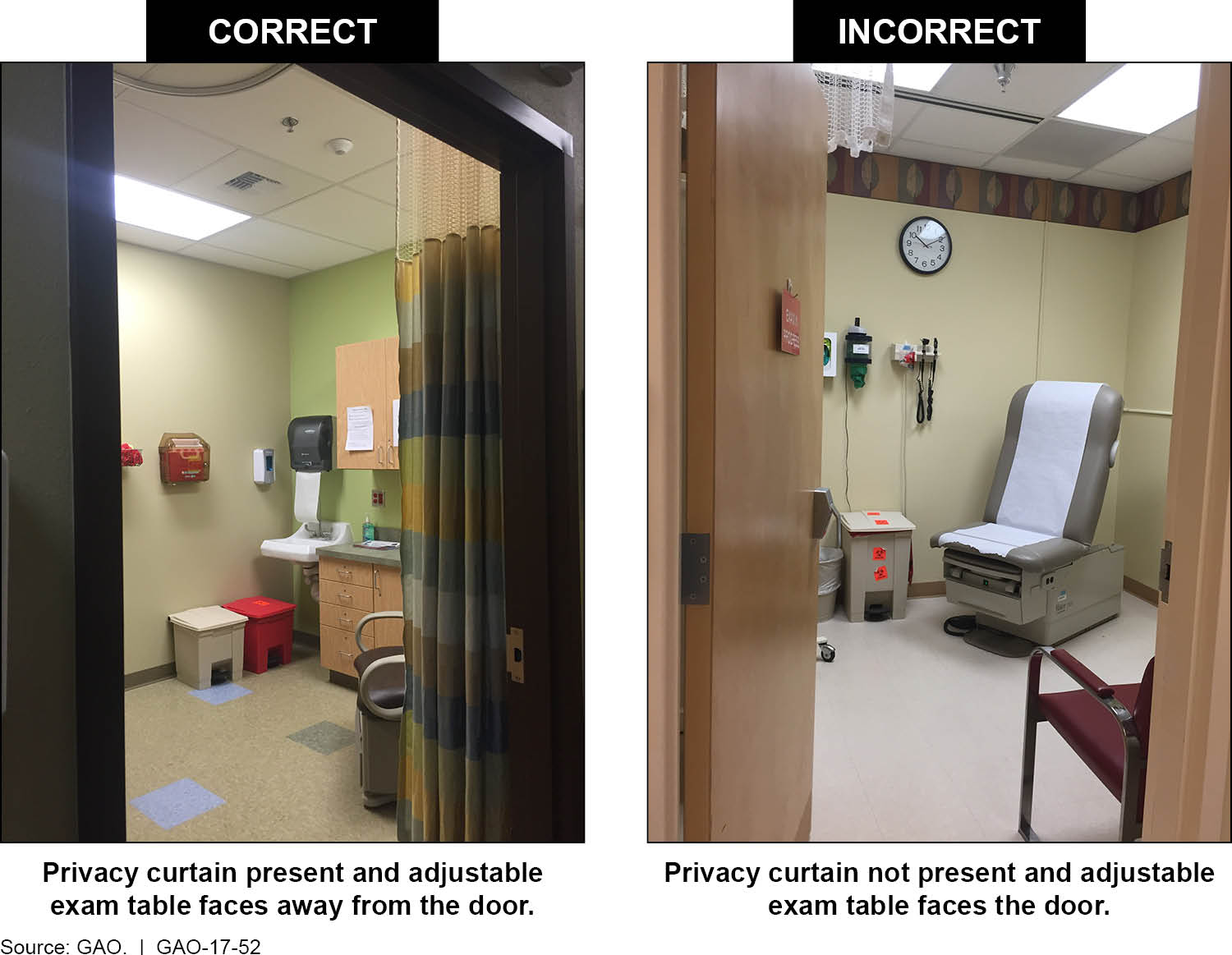 2 photos showing correct & incorrect use of privacy curtains and placement of exam table.

The Department of Veterans Affairs' (VA) Veterans Health Administration (VHA) does not have accurate and complete data on the extent to which its medical centers comply with environment of care standards for women veterans. VHA policy requires its medical facilities, including VA medical centers, to meet environment of care standards related to the privacy, safety, and dignity of women veterans. VHA Central Office relies on medical centers to conduct regular inspections and to report instances of noncompliance, which are compiled in a VHA database. However, almost all the noncompliance GAO identified through inspections at six VA medical centers it visited had not been reported or recorded in the VHA database, and compliance rates ranged from 65 percent to 81 percent. For example, GAO found a lack of auditory privacy at check-in clerk stations and a lack of privacy curtains in examination rooms, as required by VHA policy. GAO also found weaknesses in VHA's oversight of the environment of care for women, including a lack of thorough inspections and limited verification of facility-reported data which results in inaccurate and incomplete data. As a result, the privacy, safety, and dignity of women veterans may not be guaranteed when they receive care at VA facilities. Federal internal control standards for monitoring call for management to establish activities to monitor the quality of performance over time and promptly resolve any identified issues.

The Veterans Choice Program (Choice) is a primary option for veterans to receive care from non-VA providers in the community if care cannot be provided at VA facilities. While the number of obstetricians and gynecologists under Choice has increased, some areas lack these providers, according to a VHA analysis. While VHA monitors access-related Choice performance measures (such as timely appointment scheduling) for all veterans, it does not have such measures for women veterans' sex-specific care, such as mammography, maternity care, or gynecology. VHA's data show poor performance on access-related performance measures for all veterans, and GAO found cases where women veterans' maternity care was significantly delayed, suggesting that veterans, including women, face challenges receiving timely access to care. Federal internal control standards for monitoring call for management to establish activities to monitor the quality of performance over time and promptly resolve any identified issues.

GAO recommends that VA (1) strengthen the policies and guidance for its environment of care inspection process and (2) monitor women veterans' access to sex-specific care under current and future community care contracts. VA concurred with GAO's recommendations.

GAO Nerds Out for Comic-Con