The Veterans Health Administration is facing challenges recruiting and retaining clinical staff, such as physicians and registered nurses. We've found that VHA has high attrition among HR staff and weak internal control processes, which are contributing to its staffing issues. These challenges are making it more difficult for VHA to meet the health care needs of our nation's veterans.

We recommended in our reports (on which this testimony is based) that VHA improve oversight of nurse recruitment and retention initiatives, and strengthen its HR capacity. 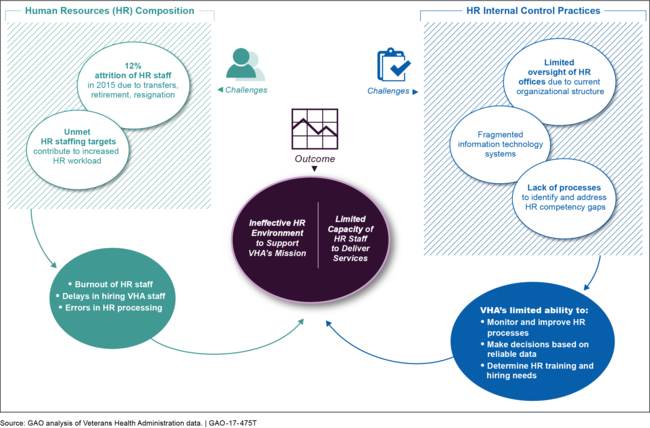 Challenges in recruiting and retaining both clinical and human resources (HR) employees along with weak HR-related internal control practices are undermining the Department of Veterans Affairs' (VA) Veterans Health Administration's (VHA) ability to meet the health care needs of veterans.

In July 2016, GAO found that VHA losses in its 5 clinical occupations with the largest staffing shortages, including physicians, registered nurses, and psychologists, increased from about 5,900 employees in fiscal year 2011 to about 7,700 in fiscal year 2015. Voluntary resignations and retirements were the primary drivers. VHA's exit survey indicated that advancement issues or dissatisfaction with certain aspects of the work were commonly cited as the primary reasons people left.

In September 2015, GAO found that VHA had multiple initiatives to recruit and retain its nurse workforce, but three of the four VA medical centers GAO reviewed faced challenges offering the initiatives due to, for example, a lack of sufficient HR support and competition with private sector medical facilities. GAO also found that VHA had not evaluated the training resources provided to nurse recruiters at VA medical centers. As a result, VHA is unable to determine to what extent its nurse recruitment and retention initiatives are effective and whether VHA has an adequate and qualified nurse workforce to meet veterans' health care needs. 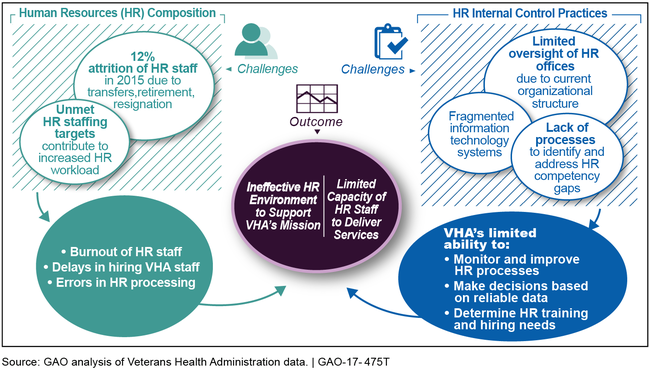 VA has exempted 108 clinical and administrative occupations from the recent hiring freeze; however, HR occupations are not among the exempt positions. A prolonged freeze could further erode VHA's capacity to provide HR services such as recruiting and hiring of staff who provide medical care to veterans.

VHA's ability to attract, hire, and retain top talent is critical to its mission to provide quality and timely care for our nation's veterans. GAO's prior work has found that VHA faces long-standing, systemic human capital challenges that limit its ability to improve delivery of health care services to veterans.

This statement is based on GAO reports issued between September 2015 and December 2016 and discusses (1) the difficulties VHA is facing in recruiting and retaining staff for key clinical positions; and (2) VHA's capacity to perform key HR functions essential to addressing these difficulties.

To conduct these studies, GAO reviewed VHA policies, directives, and other documents; analyzed VHA data; applied relevant federal internal control standards; and interviewed VA and VHA officials and staff in headquarters offices, as well as in eight VHA medical centers across the country.

GAO previously made three recommendations to VA aimed at improving oversight of nurse recruitment and retention initiatives and seven recommendations directed at strengthening VHA's HR capacity. VA concurred with GAO's recommendations and is taking steps to implement them. GAO will monitor VA's progress.