We added Department of Veterans Affairs' health care to our High-Risk List in 2015 over concerns about the timeliness, quality, and safety of veterans' health care.

In today's testimony, we discussed how VA partially met 2 of our 5 criteria for getting off the list, and the more than 100 recommendations that remain open, reflecting our areas of concern for VA health care:

(4) Inadequate training for VA staff, and 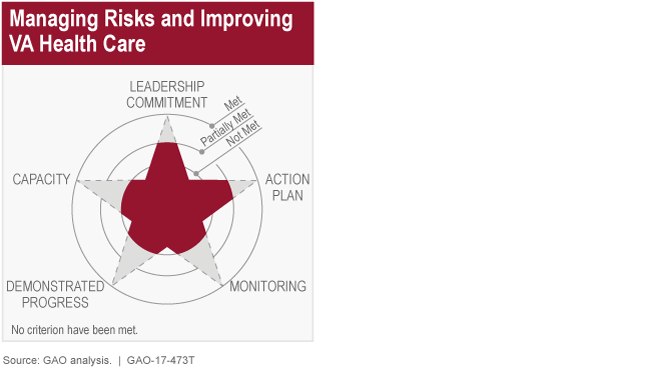 The Department of Veterans Affairs (VA) has taken action to partially meet two of the five criteria GAO uses to assess removal from the High-Risk List (leadership commitment and an action plan), but it has not met the other three (agency capacity, monitoring efforts, and demonstrated progress). Specifically, VA officials have taken leadership actions such as establishing a task force, working groups, and a governance structure for addressing the issues that led to the high-risk designation. VA provided GAO with an action plan in August 2016 that acknowledged the deep-rooted nature of the five areas of concern GAO identified: (1) ambiguous policies and inconsistent processes; (2) inadequate oversight and accountability; (3) information technology challenges; (4) inadequate training for VA staff; and (5) unclear resource needs and allocation priorities. Although VA's action plan outlined some steps VA plans to take over the next several years, several sections were missing analyses of the root causes of the issues, resources needed, and clear metrics to measure progress. 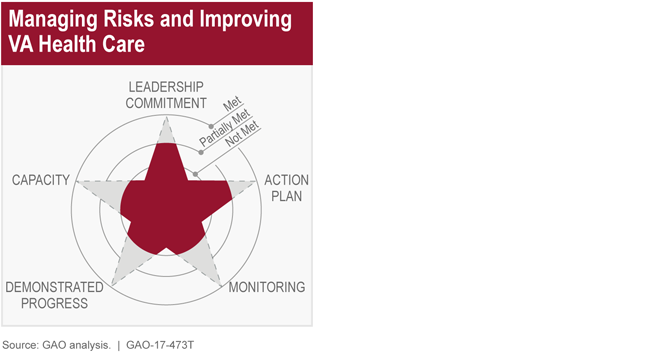 To address its high-risk designation, additional actions are required of VA, including: (1) demonstrating stronger leadership support as it continues its transition under a new administration; (2) developing an action plan to include root cause analyses for each area of concern, clear metrics to assess progress, and the identification of resources for achieving stated outcomes; and (3) implementing GAO's recommendations, not only to remedy the specific weaknesses identified, but because they may be symptomatic of larger underlying problems that also need to be addressed. Until VA addresses these serious underlying weaknesses, it will be difficult for the department to effectively and efficiently implement improvements addressing the five areas of concern that led to the high-risk designation.

Since 1990, GAO has regularly updated the list of government operations that it has identified as high risk due to their vulnerability to fraud, waste, abuse, and mismanagement, or the need for transformation to address economy, efficiency, or effectiveness challenges. VA health care was added as a high-risk area in 2015 because of concerns about VA's ability to ensure the timeliness, cost-effectiveness, quality, and safety of veterans' health care. GAO assesses High-Risk List removal against five criteria: (1) leadership commitment, (2) capacity, (3) action plan, (4) monitoring, and (5) demonstrated progress.

This statement, which is based on GAO's February 2017 high-risk report, addresses (1) actions VA has taken over the past 2 years to address the areas of concern that led GAO to designate VA health care as high risk, (2) the number of open GAO recommendations related to VA health care, and (3) additional actions VA needs to take to address the concerns that led to the high-risk designation.