As of January 31, 2017, 30 Offices of Inspector General (OIG) had completed Digital Accountability and Transparency Act of 2014 (DATA Act) readiness reviews for their respective agencies, most of which were completed from June 2016 through November 2016. GAO noted variations across the type of reviews conducted, standards used, and scope of work. For example, 16 OIG reviews focused on agencies' implementation actions to organize and design changes as recommended in the Department of the Treasury's (Treasury) DATA Act Implementation Playbook, while others included additional implementation steps.

The OIGs reported varying expectations for agencies' readiness to meet DATA Act requirements (see figure). For 26 of the 30 agencies, the OIGs reported challenges similar to those previously reported in agencies' implementation plans and by GAO, such as systems integration issues and lack of resources. Agencies have continued their implementation efforts since the OIG reviews. 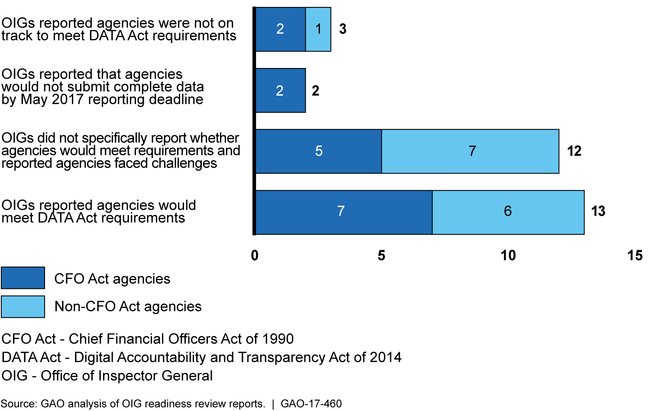 Office of Management and Budget (OMB) staff make limited use of the OIGs' readiness review reports, and Treasury officials do not use them to monitor agencies' implementation of the DATA Act. Instead, OMB staff and Treasury officials stated that they monitor agency progress through other means, such as meetings with senior accountable officials and agency self-reporting. However, the OIG readiness reviews represent an important independent resource that could be used to validate agencies' self-reported progress, identify government-wide systemic issues, and identify and communicate good practices. By not making greater use of the OIG readiness review results, OMB and Treasury may be missing additional opportunities to identify implementation issues and review information that could help inform their monitoring of agencies' implementation of the DATA Act requirements.

The DATA Act was enacted to increase accountability and transparency and, among other things, expanded on the required federal spending information that agencies are to submit to Treasury for posting to a publicly available website. The act also requires a series of oversight reports by agencies' OIGs and GAO.

The objectives of this report are to (1) describe the type of reviews and standards OIGs reported using and scope of the work covered by the DATA Act readiness review reports issued by agency OIGs as of January 31, 2017; (2) describe agencies' readiness to meet the DATA Act requirements, including the May 2017 deadline, as reported by the respective OIGs; and (3) evaluate the extent to which OMB and Treasury used or plan to use the results of the OIG readiness reviews. GAO reviewed 30 OIGs' DATA Act readiness reviews issued on or before January 31, 2017. GAO also interviewed OMB staff and Treasury officials and assessed their actions against project management criteria.

GAO recommends that OMB and Treasury establish mechanisms to assess the results of independent audits and reviews of agencies' compliance with the DATA Act requirements, including those of agency OIGs. OMB generally concurred and Treasury agreed with the recommendation. The Council of the Inspectors General on Integrity and Efficiency noted that the report will contribute to a greater understanding of OIGs' oversight and agencies' DATA Act implementation efforts.