Federal agencies fund research and development projects at small businesses with the goal of helping them develop and commercialize innovative technologies.

The two small business R&D programs we looked at require participating agencies to spend a certain percentage of their external research funding on the programs. Most agencies' spending data showed that they met these requirements.

However, we couldn't determine if the Department of Defense or the Environmental Protection Agency met the requirements because they did not collect or submit the data. We recommended that DOD and EPA establish procedures to collect and submit their data. 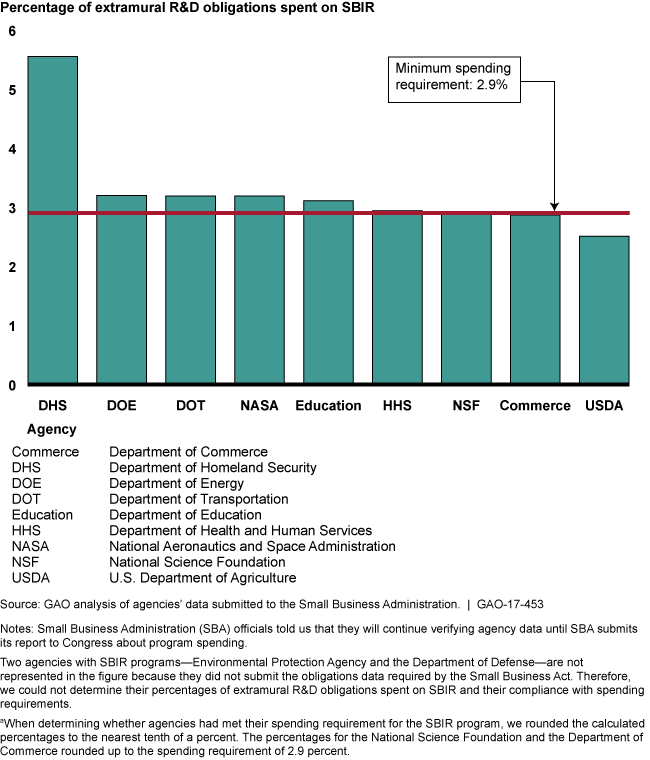 Agencies inconsistently met certain requirements to report to SBA on their methodologies for calculating their extramural R&D budgets in fiscal year 2015, and SBA officials said they are taking steps to expedite SBA's required reporting to Congress. Five of the 11 agencies submitted their required methodology reports on time. Most agencies provided detailed information in these reports, but they did not consistently provide all of the information required. Regarding SBA's own reporting requirements, as of May 2017, SBA had not submitted its report for fiscal year 2015. GAO has previously made recommendations to SBA to address these issues, and SBA is in the process of implementing them.

GAO's analysis shows that basing SBIR and STTR spending requirements on an agency's total R&D budget authority instead of on its extramural R&D obligations for fiscal year 2015 would have increased spending requirements and the number of agencies required to participate in the programs. Officials from each of the participating agencies identified benefits or drawbacks of this potential change. For example, agency officials identified more awards to small businesses as a benefit, but officials from several agencies also stated that such a change could limit resources for other R&D programs.

Through the SBIR and STTR programs, federal agencies have awarded contracts and grants totaling about $44 billion to small businesses to develop and commercialize innovative technologies. The Small Business Act requires agencies with extramural R&D obligations that meet certain thresholds—$100 million for SBIR and $1 billion for STTR—to spend a percentage of these funds on the programs. The agencies are to report on their activities to SBA and, in turn, SBA is to report to Congress.

The 2011 reauthorization of the programs includes a provision for GAO to review agencies' compliance with SBIR and STTR spending and reporting requirements and other program aspects. This report examines, for fiscal year 2015, (1) the extent to which participating agencies met spending requirements, (2) the extent to which agencies and SBA met certain reporting requirements, (3) the potential effects of basing spending requirements on total R&D budget authority instead of on extramural R&D obligations, and (4) what is known about the amounts agencies spent to administer the programs. GAO reviewed agency spending data and reports and interviewed program officials from SBA and the 11 participating agencies.

GAO recommends that DOD and EPA establish procedures to report obligations data or propose to Congress an alternative methodology for calculating spending requirements. DOD and EPA agreed with GAO's recommendation.