The Federal Aviation Administration (FAA) is implementing the Next Generation Air Transportation System (NextGen) incrementally and has taken actions to address challenges to implementation. NextGen has enhanced surface traffic operations at 39 of the 40 busiest airports in the United States by providing electronic communications to clear planes for departure, technology that can expedite clearances and reduce errors. FAA has taken steps to address challenges such as limited stakeholder inclusion that affected early implementation of NextGen. For example, FAA established groups of industry stakeholders and government officials, who worked together to develop implementation priorities. By 2025, FAA plans to deploy improvements in all NextGen areas—communications, navigation, surveillance, automation, and weather. While specific NextGen initiatives and programs have changed over time, FAA's 2016 cost estimates for implementing NextGen through 2030 for 1) FAA and 2) industry—$20.6 and $15.1 billion, respectively—are both within range of 2007 cost estimates.

Expected Improvements under the Next Generation Air Transportation System 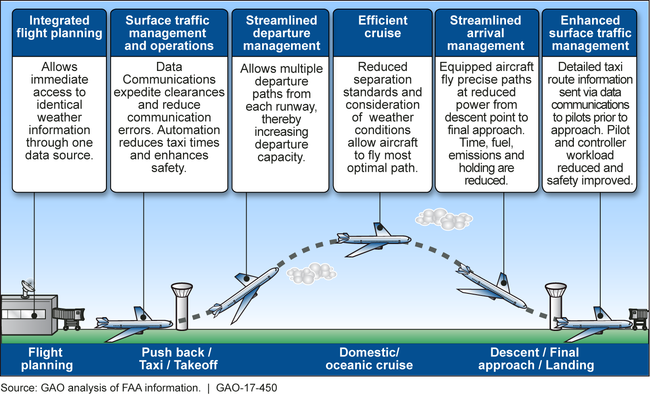 FAA's challenges as it continues to implement NextGen include uncertainties regarding future funding; whether aircraft owners equip their aircraft to use NextGen improvements; potential air traffic control restructuring; FAA's leadership stability; and cybersecurity issues. FAA is taking actions to address challenges within its control by, for example, prioritizing NextGen improvements and segmenting them into smaller pieces that each require less funding. While it is not possible to eliminate all uncertainties, FAA has adopted an enterprise risk management approach to help it identify and mitigate current and future risks that could affect NextGen implementation. Moreover, FAA has implemented most of GAO's related recommendations.

FAA is leading the implementation of NextGen, which is designed to transition the nation's ground-based air traffic control system to one that uses satellite navigation, automated position reporting, and digital communications. Planning for NextGen began in 2003 and in 2007 the effort was estimated to cost between $29 and $42 billion by 2025. NextGen is intended to increase air transportation system capacity, enhance airspace safety, reduce delays, save fuel, and reduce adverse environmental effects from aviation.

Given the cost, complexity, and length of the project, GAO was asked to review FAA's NextGen implementation efforts. This report examines: 1) how FAA has implemented NextGen and addressed implementation challenges; and 2) the challenges, if any, that remain for implementing NextGen, and FAA's actions to mitigate those challenges.

GAO reviewed FAA documents, advisory group reports, and NextGen-related recommendations made to FAA by GAO and others. GAO interviewed a non-generalizable sample of 34 U.S. aviation industry stakeholders, including airlines, airports, aviation experts and research organizations, among others, to obtain their views on NextGen challenges and FAA's efforts to address them. Stakeholders were selected based on GAO's knowledge of the aviation industry and includes those that have made NextGen-related recommendations to FAA, among other things. GAO also interviewed FAA officials regarding NextGen implementation and stakeholders' views.