Ninety percent of the seafood eaten in the United States is imported, and about half of that is raised on fish farms. Farmers may treat fish with antibiotics and other drugs because these fish can be susceptible to infections. Misuse of drugs can leave residues in seafood that cause health problems for consumers.

We looked at how the two agencies charged with ensuring seafood safety protect against unsafe drug residues, and made five recommendations to strengthen their efforts. For example, agencies could require foreign governments to do more testing for these drug residues.

Major Exporters of Popular Seafood to the United States in 2015 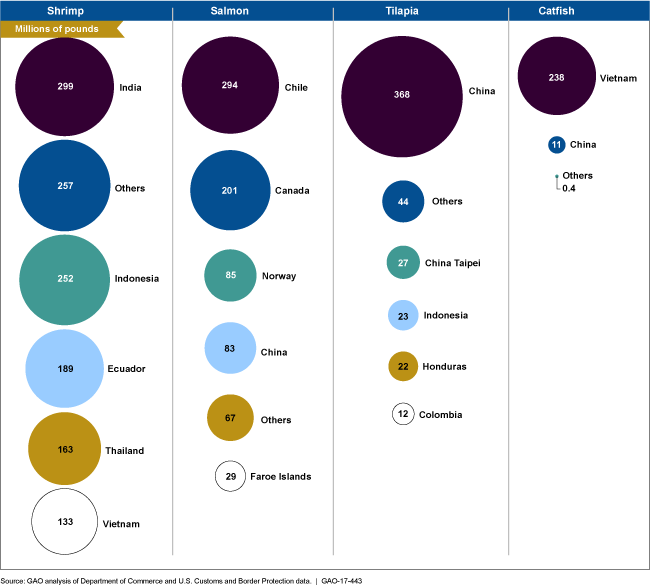 Figure showing countries that export the most shrimp, salmon, tilapia and catfish to United States.

To help ensure the safety of imported seafood from unsafe drug residues, the Food and Drug Administration (FDA) generally depends on the actions of foreign processors and U.S. importers. FDA requires processors and importers to follow its Hazard Analysis and Critical Control Point (HACCP) regulations to identify hazards and the critical control points where the hazards, such as pathogen contamination, are likely to occur and take corrective action. FDA also performs a limited number of (1) inspections of processors and importers each year to ensure HACCP compliance, and (2) tests of imported seafood for contaminants, including unsafe drug residues. FDA could strengthen its efforts to ensure the safety of imported seafood from unsafe drug residues by pursuing agreements with other countries requiring that they test seafood exported to the United States for unsafe drug residues. Under an agency plan, FDA is to coordinate with other countries to increase their capabilities related to the safety of food exported to the United States and better leverage their resources. FDA has used country agreements with respect to pathogen hazards in molluscan shellfish intended for export to the United States. According to FDA officials, it might be worthwhile for the agency to pursue agreements with some countries, but FDA would have to carefully consider a number of factors in determining which countries would be appropriate, which it has not yet done.

In assuming responsibility for inspecting imported catfish, the U.S. Department of Agriculture's (USDA) Food Safety and Inspection Service (FSIS) provided foreign countries and others a transition period—March 1, 2016, through September 1, 2017—before full implementation of its catfish inspection program. Following the transition, countries seeking to continue exporting catfish to the United States are to request equivalence determinations by providing documentation showing that their catfish safety inspection systems are equivalent to the U.S. system. FSIS could strengthen its efforts to ensure the safety of imported catfish. The Agricultural Act of 2014 directs FSIS, in part, to consider the conditions under which catfish are raised, domestically and abroad, but FSIS has not made farm visits a routine part of an equivalence determination. It is not clear how FSIS could consider the conditions under which imported catfish are raised consistent with the act without visiting farms. In addition, during this determination, the agency will already have its inspectors in the foreign country for an on-site audit. FSIS officials generally visit government offices, commercial food processing facilities, and food testing laboratories in a foreign country. Without visiting a sample of farms whose catfish are exported to the United States, FSIS may be missing an opportunity to consider the conditions under which catfish are being raised.

FDA and FSIS took steps to accomplish the transfer of catfish oversight from FDA to FSIS, as called for in the 2014 memorandum of understanding (MOU) that both agencies signed. However, they generally have not coordinated on drug residue testing methods, resulting, in some cases, in differences in drug residue levels used to determine if seafood is unsafe—specifically for unapproved drugs—as called for in the 1984 MOU. Without this coordination, the agencies do not have reasonable assurance that they are consistently protecting consumers from unsafe drug residues.

Most seafood consumed in the United States is imported, and about half of it is raised on fish farms. Because farmed seafood is raised in confined areas and susceptible to infections, farmers may use drugs like antibiotics. The use of unapproved drugs or the misuse of approved drugs may result in unsafe residues in seafood that can cause cancer or allergic reactions, according to FDA, which is charged with ensuring the safety of most seafood. Beginning in April 2016, FSIS became responsible for ensuring the safety of imported catfish.

GAO is making five recommendations, including that FDA pursue agreements with other countries to test seafood exported to the United States and that FSIS visit a sample of fish farms as part of foreign country on-site audits; and that FDA and FSIS coordinate in developing testing methods and corresponding residue levels for imported seafood. FDA agreed with or partially agreed with two; FSIS partially agreed with two and stated it already addresses a third. GAO disagrees and believes the recommendations should be implemented.

Down on the (Fish) Farm

Are you more surf than turf? Whether you call yourself a pescetarian or just enjoy the occasional...
Blog Post