Every 2 years, we examine federal programs and operations that are especially vulnerable to waste, fraud, abuse, and mismanagement, or that need transformative change—our High Risk List. This testimony reviews the status of areas on the list and outlines steps to lasting solutions.

This year, we added 3 areas, expanded 2 existing ones, and found many areas still in need of substantial attention. Yet, a number of agencies have made solid progress, including in 1 area that we removed and 2 others we narrowed.

The new High Risk areas are: 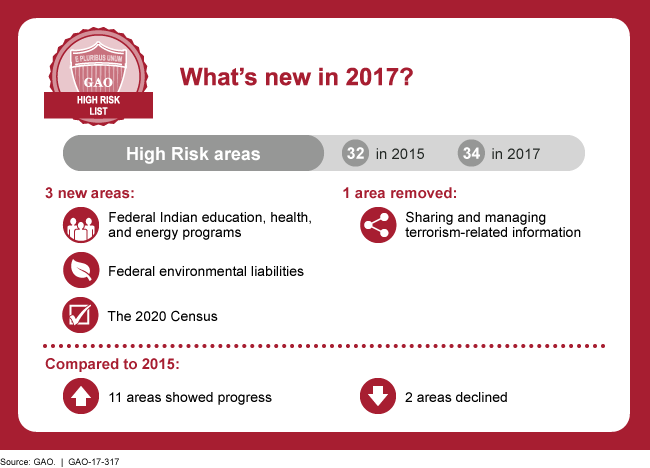 Figure showing 3 new areas, 1 area removed, and how this compares to 2015

Since GAO's last high-risk update, many of the 32 high-risk areas on the 2015 list have shown solid progress. Twenty-three high-risk areas, or two-thirds of all the areas, have met or partially met all five criteria for removal from the High-Risk List; 15 of these areas fully met at least one criterion. Progress has been possible through the concerted efforts of Congress and leadership and staff in agencies. For example, Congress enacted over a dozen laws since GAO's last report in February 2015 to help address high-risk issues.

GAO removed 1 high-risk area on managing terrorism-related information, because significant progress had been made to strengthen how intelligence on terrorism, homeland security, and law enforcement is shared among federal, state, local, tribal, international, and private sector partners. Sufficient progress was made to remove segments of 2 areas related to supply chain management at the Department of Defense (DOD) and gaps in geostationary weather satellite data.

Two high-risk areas expanded—DOD's polar-orbiting weather satellites and the Department of the Interior's restructuring of offshore oil and gas oversight. Several other areas need substantive attention including VA health care, DOD financial management, ensuring the security of federal information systems and cyber critical infrastructure, resolving the federal role in housing finance, and improving the management of IT acquisitions and operations.

GAO is adding 3 areas to the High-Risk List, bringing the total to 34:

Management of Federal Programs That Serve Tribes and Their Members. GAO has reported that federal agencies, including the Department of the Interior's Bureaus of Indian Education and Indian Affairs and the Department of Health and Human Services' Indian Health Service, have ineffectively administered Indian education and health care programs and inefficiently developed Indian energy resources. Thirty-nine of 41 GAO recommendations on this issue remain unimplemented.

U.S. Government's Environmental Liabilities. In fiscal year 2016 this liability was estimated at $447 billion (up from $212 billion in 1997). The Department of Energy is responsible for 83 percent of these liabilities and DOD for 14 percent. Agencies spend billions each year on environmental cleanup efforts but the estimated environmental liability continues to rise. Since 1994, GAO has made at least 28 recommendations related to this area; 13 are unimplemented.

The 2020 Decennial Census. The cost of the census has been escalating over the last several decennials; the 2010 Census was the costliest U.S. Census in history at about $12.3 billion, about 31 percent more than the 2000 Census (in 2020 dollars). The U.S. Census Bureau (Bureau) plans to implement several innovations—including IT systems—for the 2020 Census. Successfully implementing these innovations, along with other challenges, risk the Bureau's ability to conduct a cost-effective census. Since 2014, GAO has made 30 recommendations related to this area; however, only 6 have been fully implemented.

aLegislation is likely to be necessary in order to effectively address this area.

The federal government is one of the world's largest and most complex entities: about $3.9 trillion in outlays in fiscal year 2016 funded a broad array of programs and operations. GAO's high-risk program identifies government operations with greater vulnerabilities to fraud, waste, abuse, and mismanagement or the need for transformation to address economy, efficiency, or effectiveness challenges.

This biennial update describes the status of high-risk areas listed in 2015 and actions that are still needed to assure further progress, and identifies new high-risk areas needing attention by Congress and the executive branch. Solutions to high-risk problems potentially save billions of dollars, improve service to the public, and strengthen government performance and accountability.

This report contains GAO's views on progress made and what remains to be done to bring about lasting solutions for each high-risk area. Perseverance by the executive branch in implementing GAO's recommended solutions and continued oversight and action by Congress are essential to achieving greater progress.